Robocop vs The Terminator

RoboCop Versus The Terminator is a video game released for a number of platforms and is based on the RoboCop and Terminator franchises.

The Mega Drive/Genesis version, which was the original lead development of the game and was programmed by Virgin Games USA making use of David Perry's Mega Drive/Genesis engine, is loosely based on the 1992 four-issue comic book mini-series of the same name.

Set years after RoboCop's invention, the story involves SAC-NORAD contracting Cyberdyne Systems on building Skynet. Cyberdyne used RoboCop's technology in creating Skynet. When activated, Skynet becomes self-aware and launches a war against mankind. In the future, Skynet sends several Terminators back to the past to cripple the Resistance. After destroying one of the Terminators, RoboCop proceeds to Delta City, where he confronts RoboCain.

After RoboCain was destroyed, RoboCop battles his way to the OCP building, where he defeats all the Terminators. After defeating an ED-209 unit reprogrammed by the Terminators, RoboCop plugs himself into a console. Unknown to him, RoboCop gave Skynet information it can use. This ends up with RoboCop falling into a trap. In the future, RoboCop assembles himself, where he battled in the Terminator-infested future and destroyed Skynet.

In the future, human soldiers of John Connor's resistance force against the machines are fighting a losing war against Skynet and its robot forces. Discovering that one of the foundation technologies for Skynet is the cybernetics technology used in the creation of cyborg police officer RoboCop, Flo, a resistance soldier, is sent back in time to destroy RoboCop and stop Skynet from being built. However, Skynet learns of the time travel attempt and sends Terminators to stop Flo. RoboCop soon meets up with Flo and must engage in battle against Terminators, the forces of OCP and several obstacles.

Upon discovering one of the Terminators has infiltrated the OCP building, RoboCop plugs himself into a console to reprogram the security, only to fall into a trap and be digitized. After his body is disassembled and used for building Skynet, RoboCop watches Skynet come to power before using his digitized mind to seize control of an abandoned robotics factory, rebuild himself, and begin to destroy Skynet in the future. He successfully destroys the Skynet CPU and prevails, and turns his sights to helping humanity rebuild from the devastation. 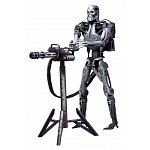