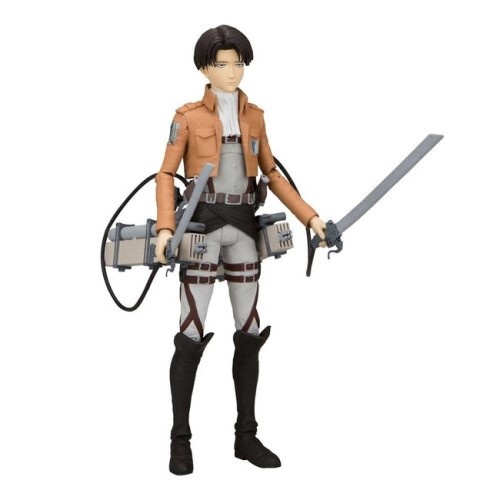 Attack on Titan(Japanese: 進撃の巨人 Hepburn: Shingeki no Kyojin?, lit. "Attacking Titan") is a Japanese manga series written and illustrated by Hajime Isayama. The series began in Kodansha's Bessatsu Shōnen Magazine on September 9, 2009, and has been collected into 21 tankōbon volumes as of December 2016. It is set in a world where humanity lives in cities surrounded by enormous walls; a defense against the Titans, gigantic humanoids that eat humans seemingly without reason. The story initially centers on Eren Yeager, his adopted sister Mikasa Ackerman and childhood friend Armin Arlert, who join the military to fight the Titans after their home town is invaded and Eren's mother is eaten. However, as the story progresses and the truths about the Titans are slowly revealed to the reader, the narrative shifts to encompass Historia Reiss, squad leader Levi, Eren's father Grisha, and other supporting characters.

The spin-off light novel series Before the Fall began in December 2011 and has received a manga adaptation. Two additional light novel series and four additional spin-off manga series have also been created. A television anime adaptation produced by Wit Studio and Production I.G aired in Japan on MBS between April and September 2013 and a second season of the series premiered in April 2017. Four video game adaptations developed by Nitroplus staffers in collaboration with Production I.G were announced to be released as bonus content for the third and sixth volumes of the Blu-ray Disc release of the anime, with another game developed by Spike Chunsoft for the Nintendo 3DS. A two-part live-action film adaptation, Attack on Titan and Attack on Titan: End of the World, and a live-action web-series were released in 2015. An anime adaptation of the Junior High spin-off manga, produced by Production I.G, began airing in October 2015. Attack on Titan and all five spin-off manga are published in North America by Kodansha Comics USA, while the three novel series are published by Vertical. The anime has been licensed by Funimation for North America, by Manga Entertainment for the UK, and by Madman Entertainment for Australasia.

Attack on Titan has become a commercial success. As of April 2017, the manga has 66 million copies in print. The release of the anime also saw a boost in the series' popularity, with it having received critical acclaim for its atmosphere and story. Although it also gained fame in neighboring Asian countries, the series' themes have been a subject of controversy.