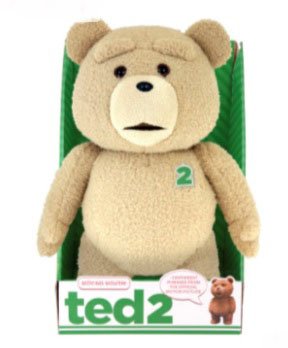 Ted 2 is a 2015 American comedy film directed by Seth MacFarlane and written by MacFarlane, Alec Sulkin, and Wellesley Wild. It was released on June 26, 2015, by Universal Pictures, and is a sequel to the 2012 film Ted, and stars Mark Wahlberg and MacFarlane, both reprising their roles from the original film, as John Bennett and his sentient teddy bear friend Ted respectively. The story involves Ted fighting for his civil rights when authorities rule that he is property rather than a person, putting him again at risk from his stalker Donny (Giovanni Ribisi). The film received mixed reviews from critics and has grossed over $213 million.

Plot:
John Bennett (Mark Wahlberg) has been divorced from Lori Collins for six months due to her not accepting Ted (Seth MacFarlane) again despite her wish in bringing Ted back to life. Meanwhile, Ted marries his girlfriend, Tami-Lynn (Jessica Barth). One year later, their marriage is beginning to break down so they decide to have a child. As Ted cannot have children, John agrees to help Ted find a sperm donor. They ask Sam J. Jones, but he refuses due to a low sperm count. Then they try unsuccessfully to break into Tom Brady's house and steal his sperm. Ultimately, John offers to donate his sperm (something that Ted wanted to ask him but hesitated due to John's divorce).