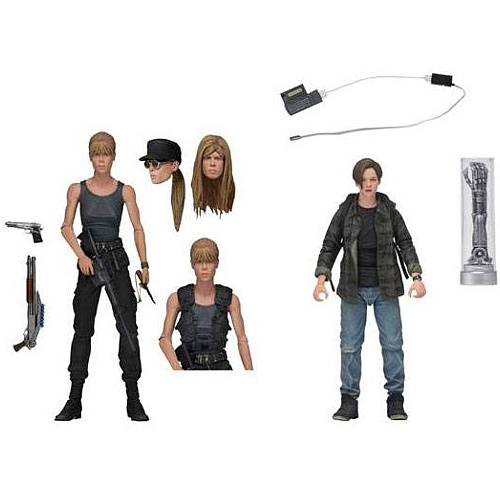 Terminator 2: Judgment Day is a 1991 American science fiction action thriller film written, produced and directed by James Cameron. The film stars Arnold Schwarzenegger, Linda Hamilton, Robert Patrick and Edward Furlong. It is the second installment of the Terminator franchise and the sequel to the 1984 film The Terminator. Terminator 2 follows Sarah Connor (Hamilton) and her ten-year-old son John (Furlong) as they are pursued by a new, more advanced Terminator, the liquid metal, shapeshifting T-1000 (Patrick), sent back in time to kill John Connor and prevent him from becoming the leader of the human resistance. A second, less advanced, Terminator (Schwarzenegger) is also sent back in time to protect John.

After a troubled pre-production characterized by legal disputes, Mario Kassar of Carolco Pictures emerged with the franchise's property rights in early 1990. This paved the way for the completion of the screenplay by a Cameron-led production team, and the October 1990 start of a shortened 186-day filming schedule. The production of Terminator 2 required an unprecedented budget of more than $94 million, much of which was spent on filming and special effects. The film was released on July 3, 1991, in time for the U.S. Fourth of July weekend.

The film's visual effects saw breakthroughs in computer-generated imagery, including the first use of natural human motion for a computer-generated character and the first partially computer-generated main character. Terminator 2 was a box office and critical success and influenced popular culture, especially the use of visual effects in films. It received many accolades, including four Academy Awards for Best Sound Editing, Best Sound Mixing, Best Makeup, and Best Visual Effects. The highest-grossing film of 1991, several publications such as the American Film Institute have since ranked Terminator 2 as one of the greatest action films, science fiction films and sequels of all time.

In 1995, John Connor is ten years old and living in Los Angeles with foster parents. His mother Sarah Connor had been preparing him throughout his childhood for his future role as the leader of the human resistance against Skynet, but was arrested after attempting to bomb a computer factory and imprisoned at a mental hospital under the supervision of Dr. Silberman. Skynet sends a new Terminator, designated as 'T-1000', back in time to kill John. An advanced prototype, the T-1000 is composed of a 'mimetic poly-alloy' that allows it to take on the shape and appearance of anything it touches (short of complex devices such as guns or bombs), and transform parts of its anatomy into knives and stabbing weapons. The T-1000 arrives under a freeway, kills a policeman and assumes his identity. Meanwhile, the future John Connor has sent back a reprogrammed T-800 Terminator to protect his younger self.

The Terminator and the T-1000 converge on John in a shopping mall, and a chase ensues in which John and the Terminator escape together by motorcycle. Fearing that the T-1000 will copy and kill Sarah in order to get to him, John orders the Terminator to help free her. They encounter Sarah escaping the hospital, and escape from the T-1000 in a police car. The Terminator informs John and Sarah about Skynet, the artificial intelligence that will initiate a nuclear war called "Judgment Day" and go on to create the machines that will hunt the remnants of humanity. Sarah learns that the man most directly responsible for Skynet's creation is Miles Dyson, a Cyberdyne Systems engineer working on a revolutionary new microprocessor that will form the basis for Skynet.

Sarah gathers weapons from an old friend and plans to flee with John to Mexico, but after witnessing a nuclear explosion in a nightmare, she sets out instead to kill Dyson in order to prevent Judgment Day from occurring. Finding him at his home, she wounds him but finds herself unable to execute him in front of his family. John and the Terminator arrive and inform Miles of the future consequences of his work. They learn that much of his research has been reverse engineered from the damaged CPU and the right arm of the previous Terminator. Convincing him that these items and his designs must be destroyed, they break into the Cyberdyne building and retrieve the CPU and the arm. The police arrive and Miles is shot, but he manages to trigger the explosives, destroying the lab and his research. The T-1000 relentlessly pursues the surviving trio, eventually cornering them in a steel works.

The T-1000 succeeds in seriously damaging, and temporarily shutting down the Terminator, until its emergency back-up system brings it back online. The Terminator surprises the T-1000, shooting it into a vat of molten metal with a grenade launcher and destroying it. John disposes of the arm and CPU of the original Terminator in the vat. As Sarah expresses relief that the ordeal is over, the Terminator explains that in order to ensure the success of its mission, it must also be destroyed. It asks Sarah to assist in lowering it into the vat of metal, since it is unable to "self-terminate". John begs the Terminator to alter its decision, but it bids them farewell as it is lowered into the vat. The Terminator gives the tearful John a final thumbs-up, as it disappears into the molten steel and shuts down. Sarah looks to the future with hope, musing "if a machine, a Terminator, can learn the value of human life, maybe we can too."