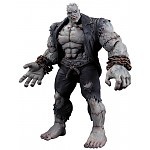 Written by veteran Batman writer Paul Dini with Paul Crocker and Sefton Hill, Arkham City is based on the franchise's long-running comic book mythos. In the game's main storyline, Batman is incarcerated in Arkham City, a huge new super-prison enclosing the decaying urban slums of fictional Gotham City. He must uncover the secret behind the sinister scheme, "Protocol 10", orchestrated by the facility's warden, Hugo Strange. The game's leading characters are predominantly voiced by actors from the DC Animated Universe, with Kevin Conroy and Mark Hamill reprising their roles as Batman and the Joker, respectively. The game is presented from the third-person perspective with a primary focus on Batman's combat and stealth abilities, detective skills, and gadgets that can be used in both combat and exploration. Arkham City expands Batman's arsenal of gadgets and combat attacks and offers a more open world structure, allowing the player to complete side missions away from the primary storyline.

The game received critical acclaim, particularly for its narrative, character and world designs, and Batman's combat and navigation abilities. It was tied for the highest-rated video game of 2011 according to review aggregator Metacritic, and was the recipient of several awards including: Game of the Year, Best Action Game, Best Action Adventure Game, Best Adventure Game, and Best Original Score from various media outlets. Arkham City was followed by several additional releases: a spin-off mobile game, Batman: Arkham City Lockdown, on December 7, 2011; a Game of the Year edition containing all of the game's downloadable content on May 29, 2012; and Wii U and OS X versions in November and December 2012, respectively. A successor, Batman: Arkham Origins, was released in October 2013, and a narrative sequel, Batman: Arkham Knight, is scheduled to be released in June 2015.