Injustice - Gods Among Us 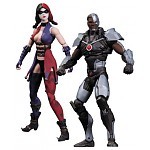 Injustice: Gods Among Us is a fighting video game based upon the fictional universe of DC Comics. The game was developed by NetherRealm Studios and published by Warner Bros. Interactive Entertainment for the PlayStation 3, Wii U, and Xbox 360. It was released in April 2013 in North America, Europe, and Australia, and June 2013 in Japan. An iOS variation of the game was released on April 3, 2013. The game was also ported to Android on November 21, 2013.

The gameplay for Injustice: Gods Among Us involves one-on-one matches within a two-dimensional plane, although characters and backgrounds are rendered in a three-dimensional fashion. Contrarily to the classic scheme of multiple rounds with health bars refilling in between, Injustice follows a scheme similar to the Killer Instinct series, where each match consists of a single round, in which each player has two health bars. The game uses a four-button control layout of light, medium, and heavy attacks, alongside a "character trait" button that activates a unique ability or attack designed to showcase each character. For instance, Superman's trait provides a temporary stat boost, while Batman's trait summons a swarm of robotic bats.

The stages, based on locations such as the Batcave, Watchtower, and Fortress of Solitude, feature interactive environments and multiple areas. If a heavy attack is connected near a corner that leads to another area, it launches the opponent, triggering a special animation, and taking the fight to this new part of the stage. Each arena also contains objects that the characters utilize differently depending on their class.Characters can be either gadget characters or power characters. A gadget character like Batman can attach a bomb to a car to cause an explosion, while a power character like Superman can pick up the same car and smash his opponents with it. Before each fight, players have the option to turn off interactive elements and area transitions.

During combat, players charge their character's super meter by performing combos or getting hit by the opponent. Portions of the super meter can be used for performing enhanced special moves or countering enemy moves. With a full meter, players can unleash their strongest special attack. Players may also expend meter to interrupt a combo, entering a wager battle, dubbed the Clash system, which combines individualized cutscene cinematics with the process of betting meter. A clash may be triggered by a player only after they have lost their first health bar. During the sequence, both players commit portions of their meter in secret, with the highest bidder winning the clash.

The story mode is split into several chapters. As the narrative plays out, the player swaps between different characters. Minigames are also incorporated into the story. The outcome of minigames can impact an upcoming battle, such as giving the player a health advantage over the CPU opponent. Additional features include Battle Mode, Versus Mode, Training Mode, and S.T.A.R. Labs, which includes 240 character-specific challenges of varying difficulty. Online multiplayer modes include King of the Hill, a setup that allows up to eight players to spectate a match while waiting for their turn to fight, and Survivor, which carries over the current winner's health bar and character selection over each match. Playing through any of the game's modes, including online matches with optional goal objectives, will net the player experience points that may be used to unlock alternate costumes, music, concept art, and other rewards.