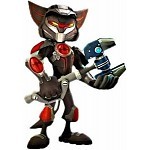 The game follows the anthropomorphic character Ratchet meeting the robot Clank on his home planet. Clank discovers that the villainous Chairman Drek of the Blarg race plans to create a new planet for his species, destroying the galaxy in the process. Clank convinces Ratchet to help him in his quest to gain the help of the famous superhero Captain Qwark, but they soon discover that they must save the galaxy on their own.

The game offers a wide range of weapons and gadgets that the player must use to defeat numerous enemies and solve puzzles on a variety of different planets in the fictional "Solana" galaxy. The game also includes several mini-games, such as racing or lock-picking, which the player must complete to proceed. The game was positively received by critics, who praised the graphics and variety of gameplay, along with the comic and humorous style to the sci-fi story.