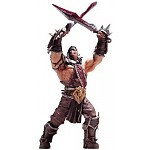 With over 10 million subscribers as of November 2014,World of Warcraft is currently the world's most-subscribed MMORPG,and holds the Guinness World Record for the most popular MMORPG by subscribers.Having grossed over 10 billion dollars as of July 2012, it is also the highest grossing video game of all time. In January 2014 it was announced that more than 100 million accounts had been created over the game's lifetime.