The film was announced in July 2014 at San Diego Comic-Con and Vogt-Roberts was announced as the director in September 2014. The project originally began at Universal as an origin story but was later moved to Warner Bros. in order to develop a shared cinematic universe featuring Godzilla and King Kong. Principal photography began in October 2015 in Hawaii and various locations around Vietnam and ended in March 2016.

Kong: Skull Island had its world premiere at Empire, Leicester Square on February 28, 2017 and was released on March 10, 2017, by Warner Bros. Pictures. The film received generally positive reviews, with praise for its visual effects, action, and performances (particularly that of Jackson and Reilly). It was also a box office success, grossing $168 million domestically and $566 million worldwide. The film was nominated for Best Visual Effects at the 90th Academy Awards. A sequel, Godzilla vs. Kong, is scheduled to be released on March 13, 2020. 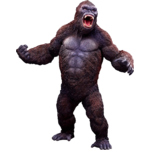