Spider-Man is a fictional character, a comic book superhero that appears in comic books published by Marvel Comics. Created by writer-editor Stan Lee and writer-artist Steve Ditko, he first appeared in Amazing Fantasy #15 (cover-dated Aug. 1962). Lee and Ditko conceived the character as an orphan being raised by his Aunt May and Uncle Ben, and as a teenager, having to deal with the normal struggles of adolescence in addition to those of a costumed crimefighter. Spider-Man's creators gave him super strength and agility, the ability to cling to most surfaces, shoot spider-webs using wrist-mounted devices of his own invention (which he called "web-shooters"), and react to danger quickly with his "spider-sense", enabling him to combat his foes.

Spider-Man is one of the most popular and commercially successful superheroes. As Marvel's flagship character and company mascot, he has appeared in many forms of media, including several animated and live-action television shows, syndicated newspaper comic strips, and a series of films starring Tobey Maguire as the hero in the first three movies. Andrew Garfield took over the role of Spider-Man in a reboot of the films. Reeve Carney starred as Spider-Man in the 2010 Broadway musical Spider-Man: Turn Off the Dark. Spider-Man placed 3rd on IGN's Top 100 Comic Book Heroes of All Time in 2011, behind DC Comics characters Superman and Batman. 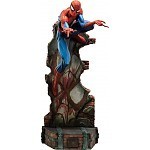