Funko is proud to announce a historic partnership with PLAYMOBIL, one of the most cherished names in collectibles history. Funko – the largest stylized vinyl collectibles company in the world - and PLAYMOBIL are collaborating to pair the classic articulated, 6-inch ABS figures with exciting pop culture and entertainment licenses for a collector-focused line. As PLAYMOBIL’s first official licensee, Funko will have the opportunity to bring new and beloved characters to PLAYMOBIL’s nostalgic frame.

“We’re honored and thrilled to create a historic cross-license with PLAYMOBIL and bring their unique style to the hip and trendy pop culture licenses Funko is known for,” said Funko CEO Brian Mariotti.  “It’s an amazing opportunity, and we know fans of both styles are going to love these figures.”


Funko’s first wave of PLAYMOBIL 6 inch, 200% figures will include characters from Willy Wonka and the Chocolate Factory, Ghostbusters, Back to the Future, and BBC’s Sherlock and Doctor Who, with many more forthcoming. 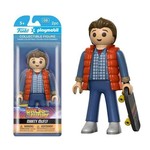