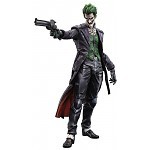 Written by Corey May, Ryan Galletta and Dooma Wendschuh, the game's main storyline is set five years before that of 2009's Batman: Arkham Asylum and follows a younger, less-refined Batman. A bounty is placed on him by crime lord Black Mask, drawing eight of the world's greatest assassins to Gotham City on Christmas Eve. The villains, including the Joker and Anarky, take advantage of the chaos to launch nefarious schemes, while Gotham City police try to apprehend Batman.

The game, played from a third-person perspective, focuses on Batman's combat and stealth abilities, detective skills, and gadgets for combat and exploration. Aside from the main story, Batman can help the police deal with crimes, and confront other supervillains terrorizing the city. Arkham Origins introduces the ability for Batman to virtually recreate crimes, allowing him to investigate the scene and identify the culprit. The game is the first in the series with multiplayer capability. Warner Bros. Games Montréal took over development duties for Arkham Origins from series creators Rocksteady Studios.

While the game received generally positive reviews, it was criticized for replicating previous Arkham games' content and unnecessarily modifying it, while the multiplayer aspect was considered an unnecessary addition to the series. A companion game, Batman: Arkham Origins Blackgate, was released with Arkham Origins for Nintendo 3DS and PlayStation Vita, and a spin-off mobile game for the iOS and Android platforms was released in October 2013. An animated sequel, Batman: Assault on Arkham, was released in 2014, and a successor game, Batman: Arkham Knight, is scheduled for release in June 2015.