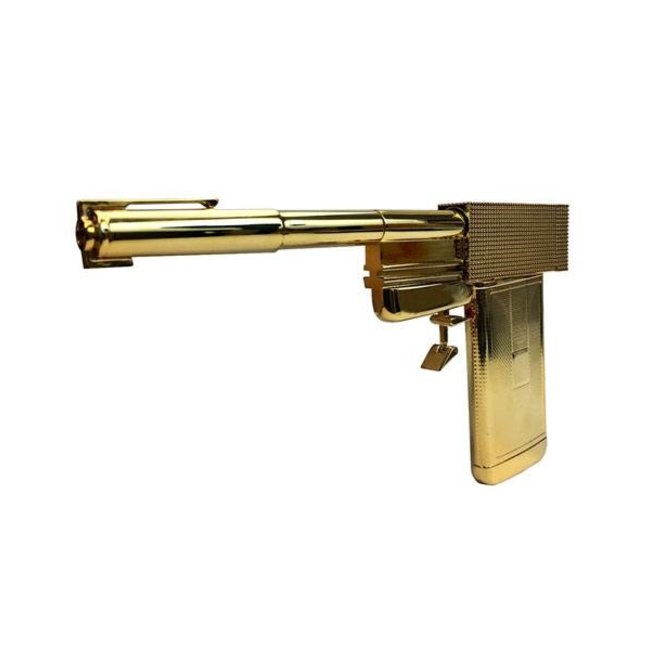 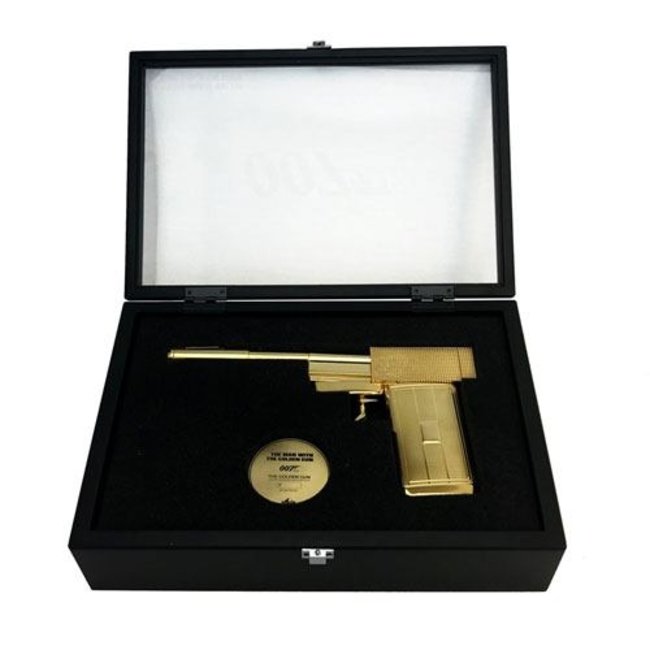 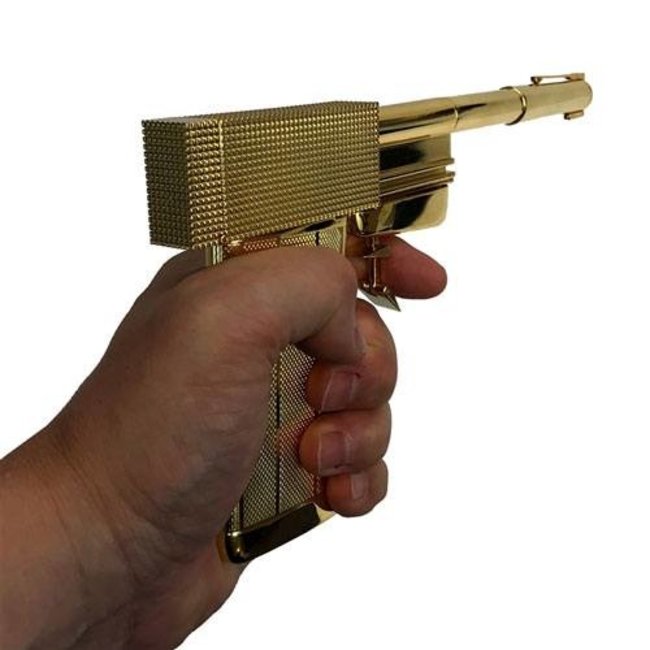 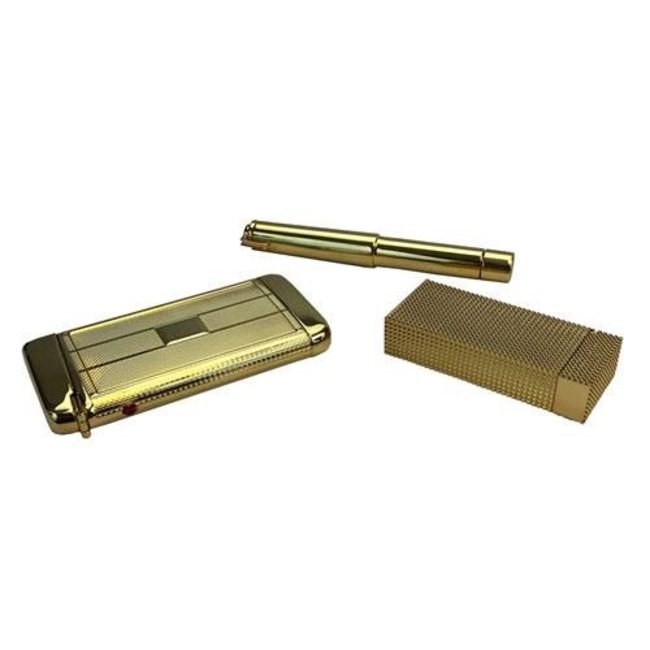 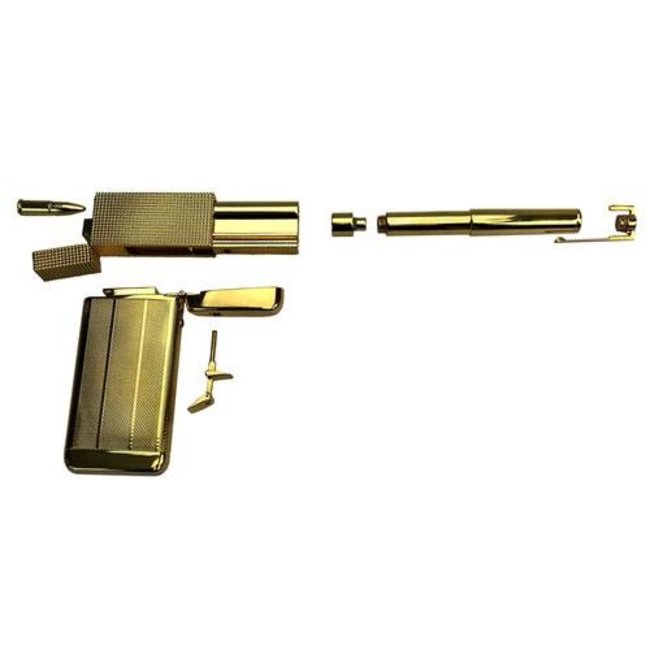 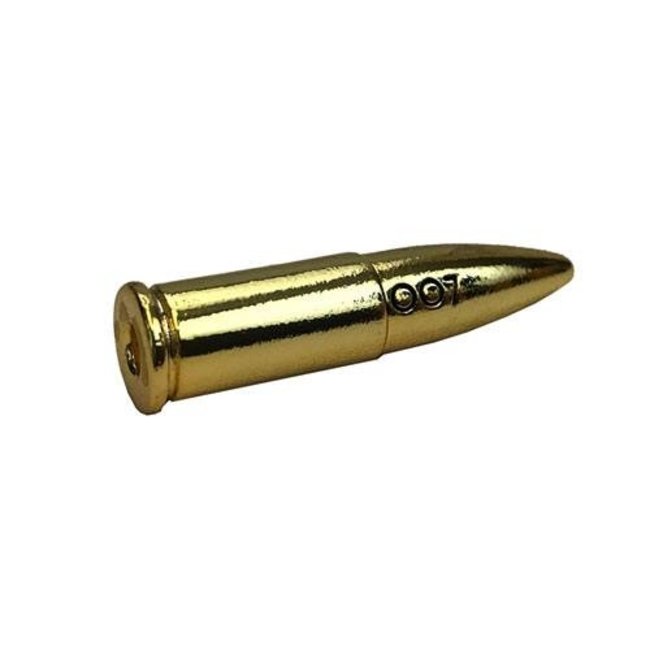 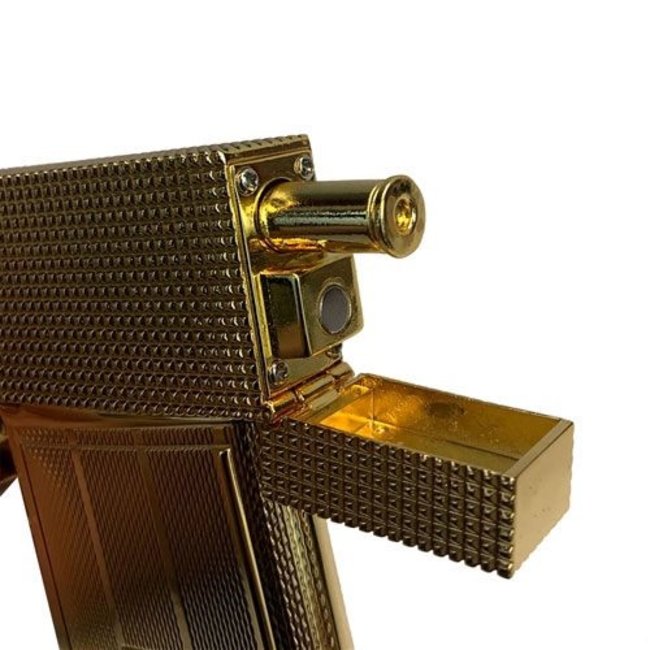 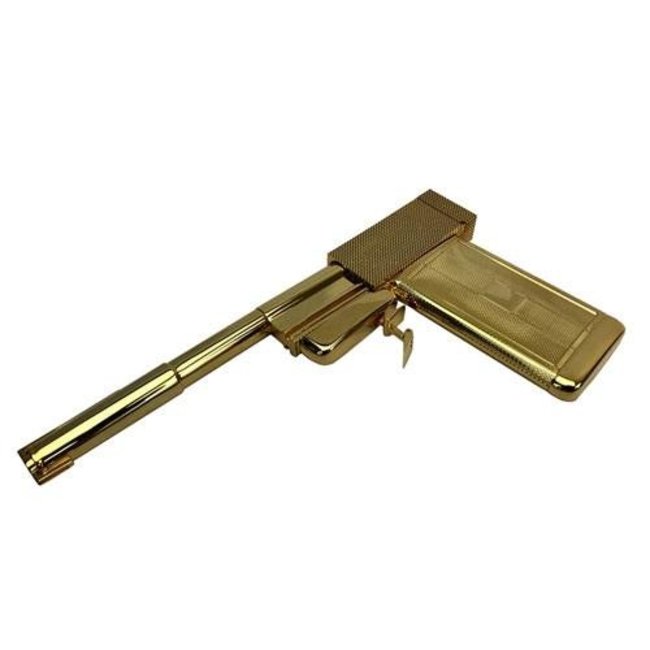 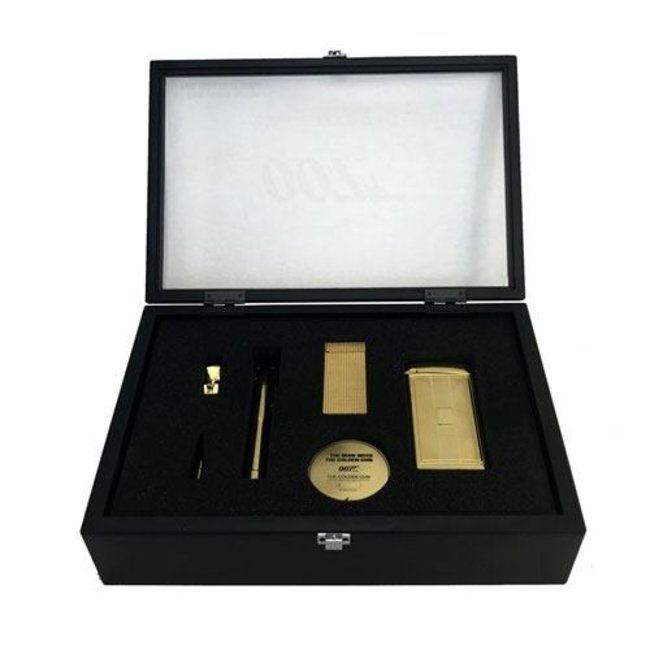 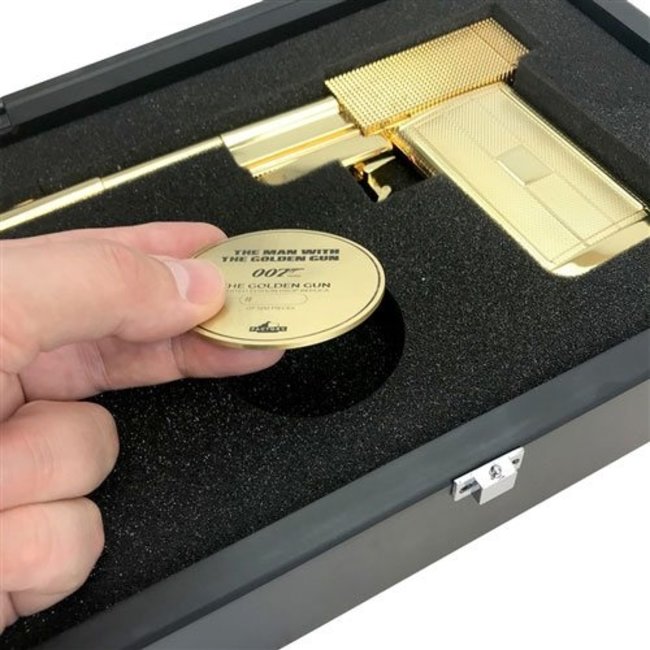 The prop is the signature weapon of the '$1 million dollar per shot' assassin, Francisco Scaramanga, as featured in the The Man With the Golden Gun (1974). Scaramanga's Golden Gun was made up of seemingly innocuous separate elements that when combined created a deadly single shot handgun, a weapon that was not quite deadly enough to best 007. The Golden Gun is certainly one of the most iconic weapons of the James Bond series, and perhaps one of the most widely recognized cinematic weapons of all time.?

This stunning 1:1 scale prop replica of the Golden Gun, officially licensed by Danjaq LLC and EON Productions, has been created after meticulous study and research of the original props in the EON archives as well as interviews with original cast and crew. The replica can be assembled and disassembled into its machined and cast metal, 24k gold plated component parts, exactly as per the original prop:

- Fountain Pen - Forming the 'barrel' of the replica, the pen screws directly into the body of the lighter. Includes removable thread cap. An orange marking has been added to the end of the barrel to comply with modern regulations concerning replica weapons.
- Lighter - With a hidden 'slide out' section the lighter forms the main body of the replica. The lighter 'lid' opens to reveal a breech chamber.
- Cigarette Case - Open the end to create the handle and trigger housing of the replica. The Colibri logo engraved on the lighter lid on the original prop is not included on the replica for trademark reasons.
- Cufflink - With a sprung blade, the cufflink screws into the trigger housing, firmly locking all the components together and allowing for a trigger-like effect.
- Bullet - A replica bullet inscribed with the 007 legend that can be fitted into the 'breech' of the cigarette lighter or displayed separately.

To allow you to showcase this collectible to maximum effect, each replica includes a piano-black lacquered wooden presentation case with a ghosted 007 logo decorated acrylic window in the lid. The inside of the case features and a reversible liner that allows you to display the replica either assembled or disassembled. 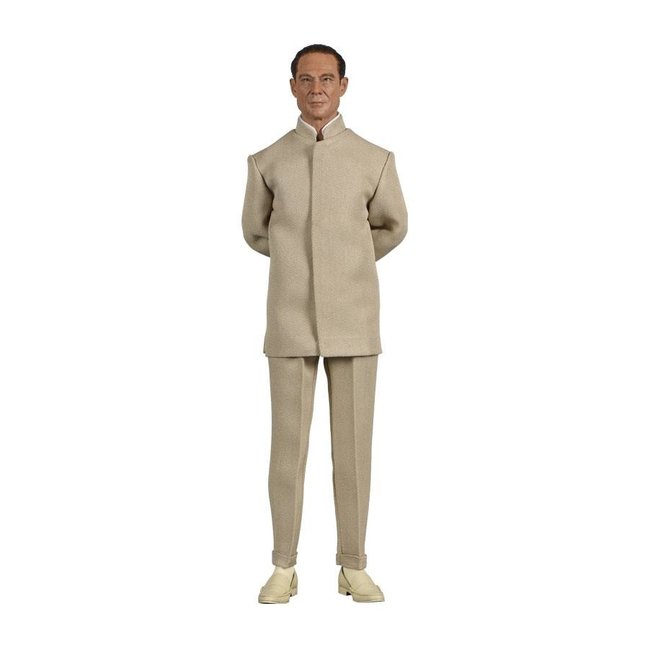 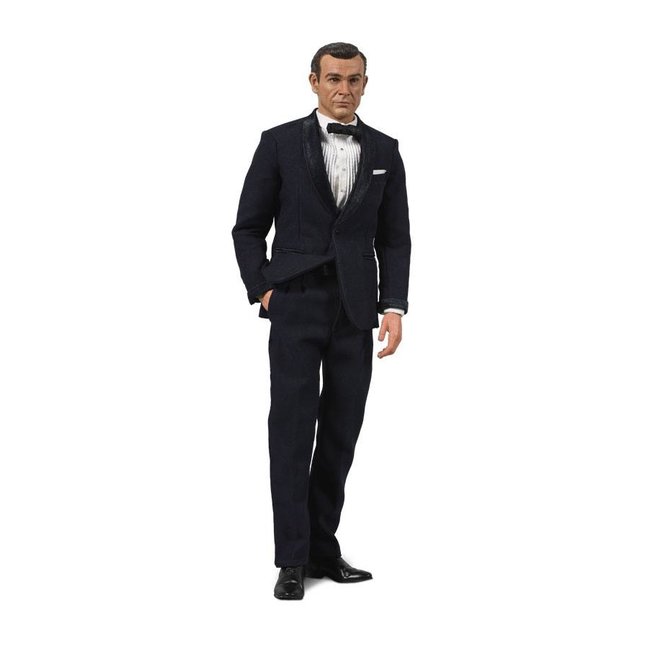 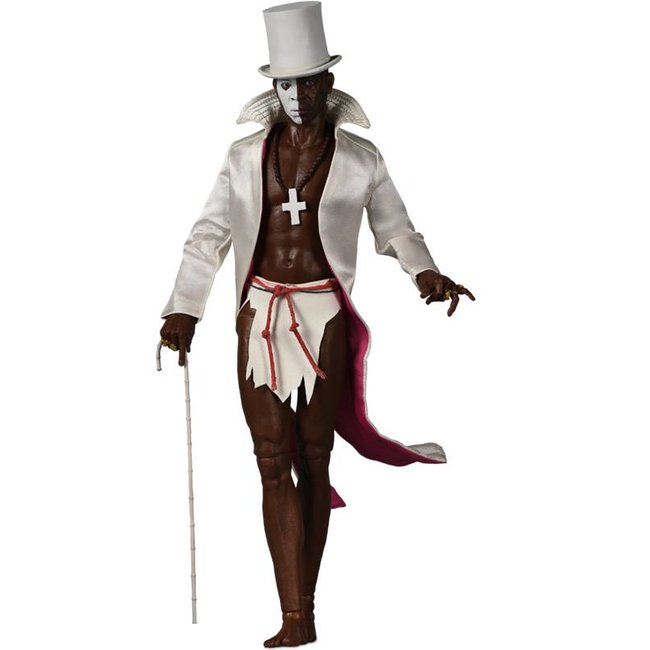 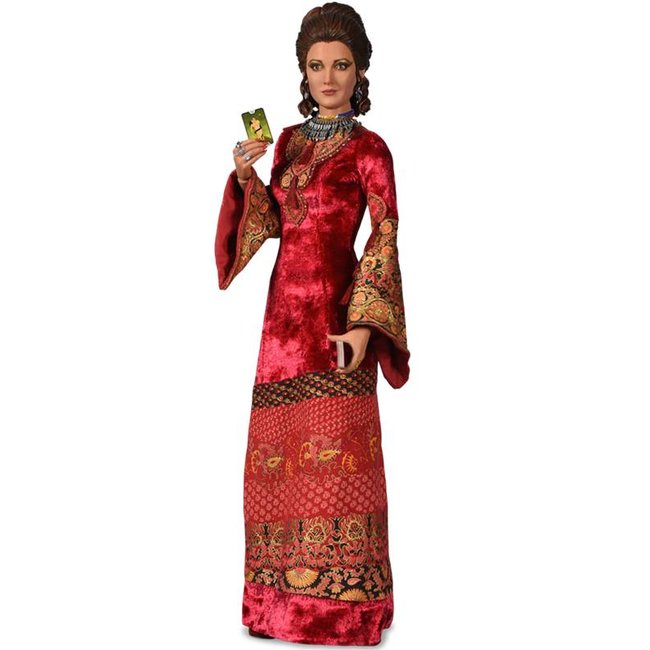