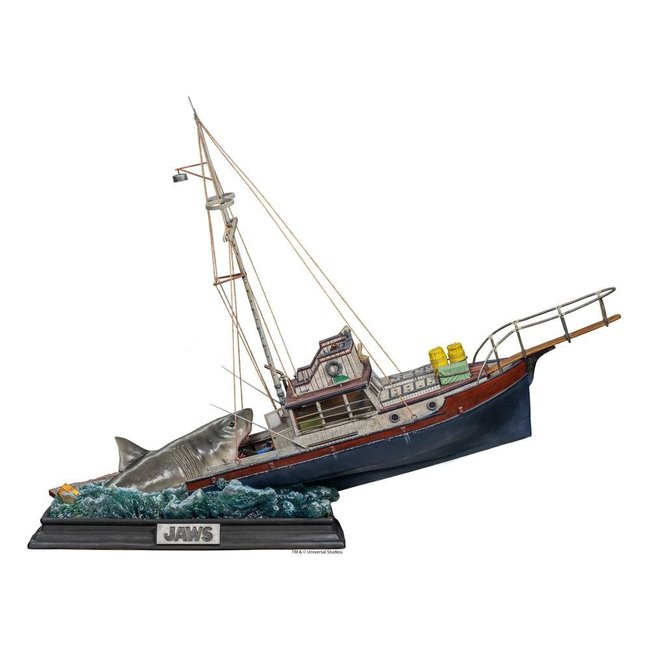 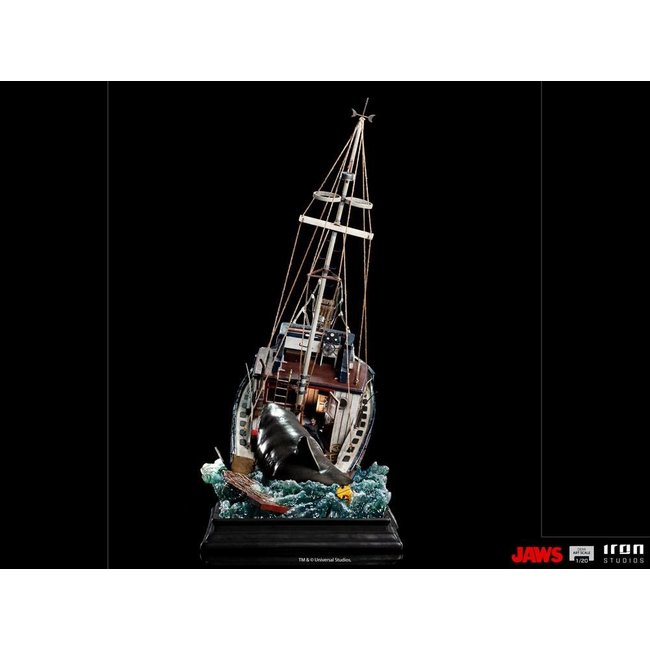 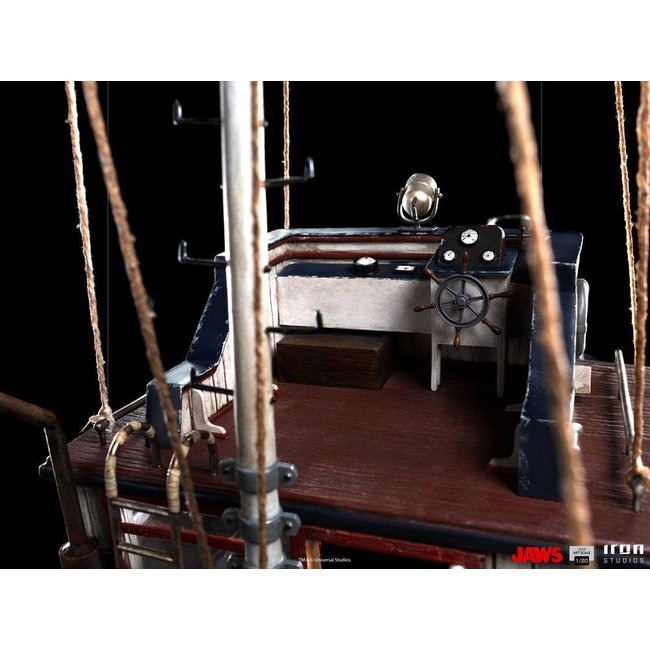 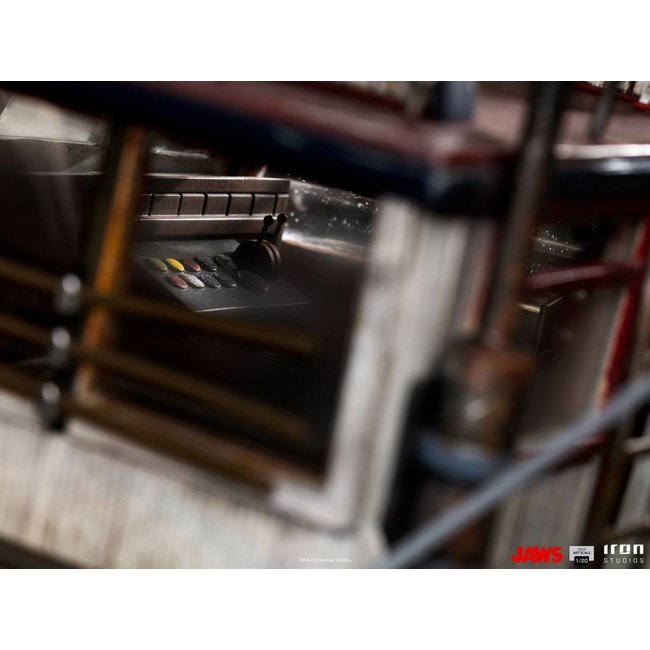 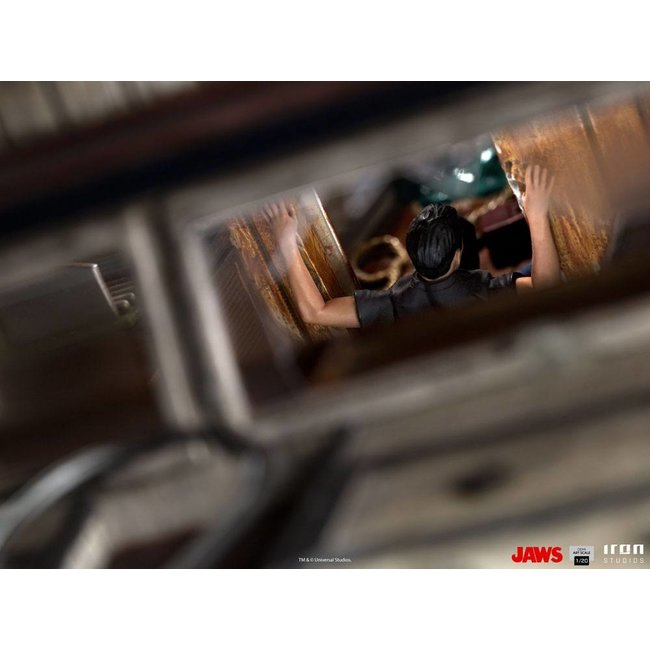 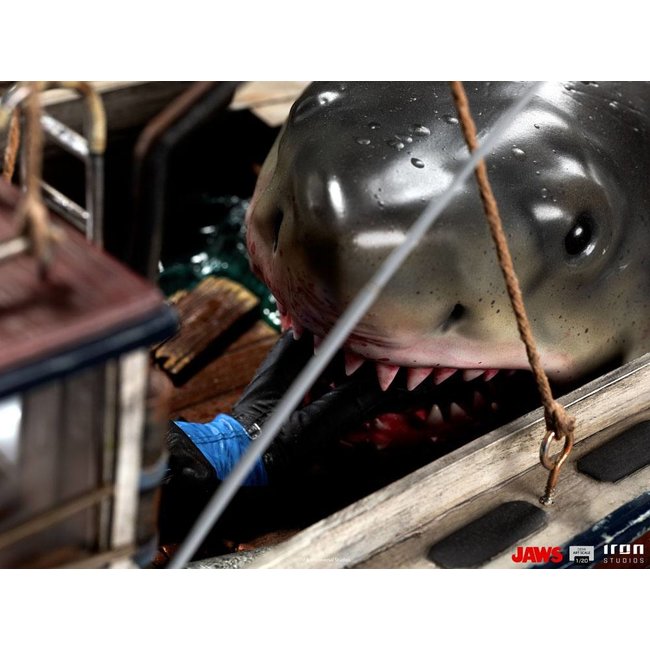 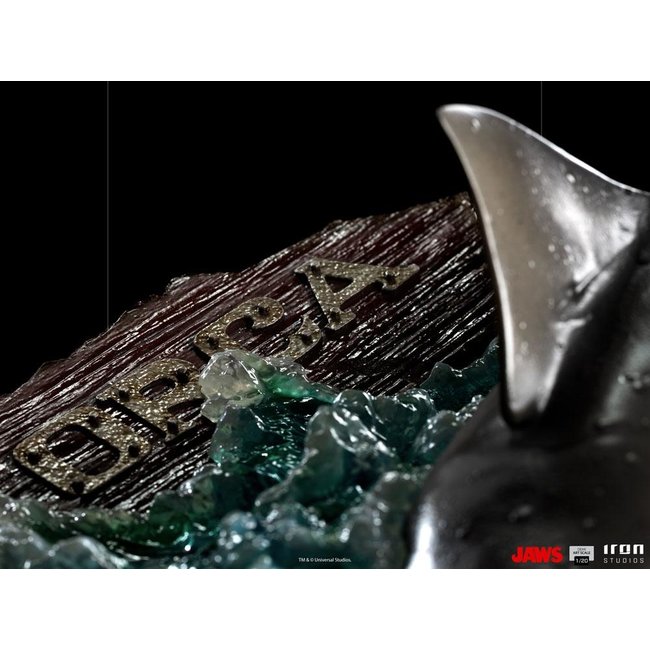 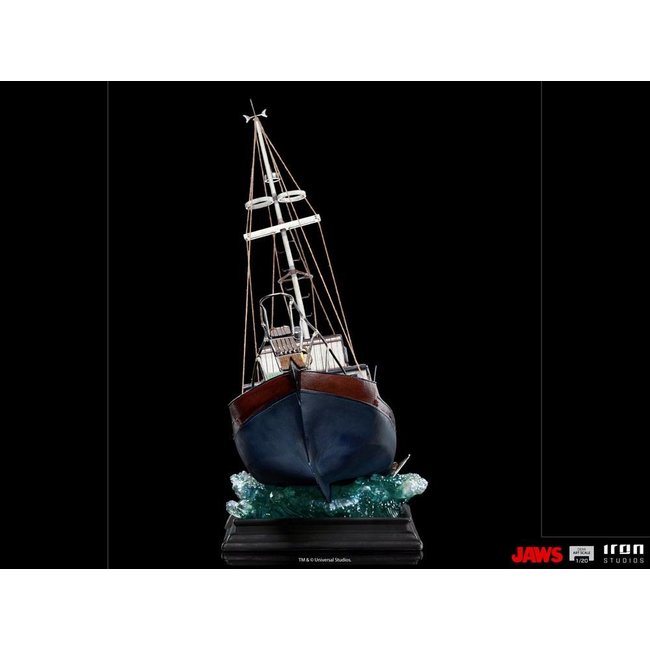 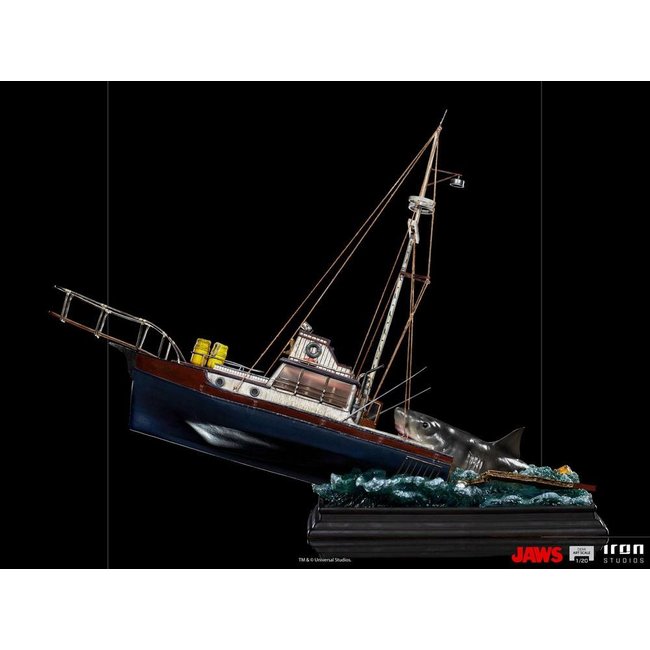 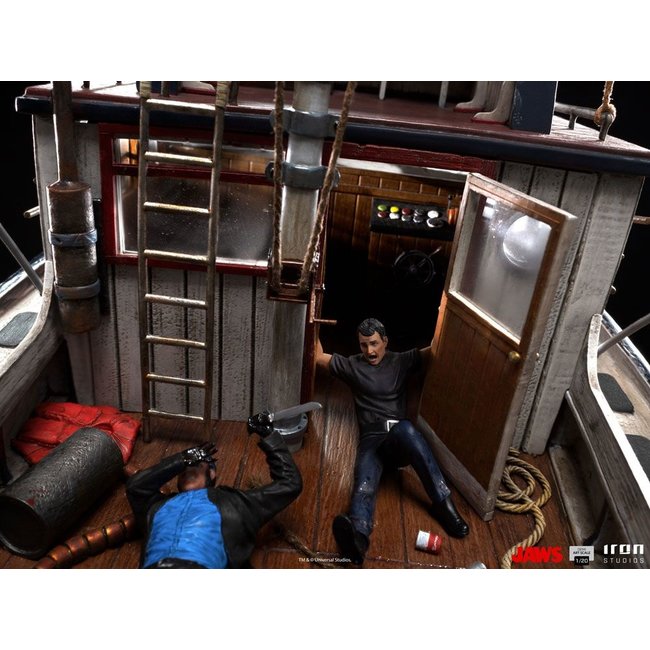 Off the coast of Amity Island, the famous shark fishing vessel called the Orca, named after the shark's only natural enemy faces its wreckage after a long hunt for the deadliest marine predator it has ever faced. Crewed by its captain, eccentric war veteran Sam Quint, alongside Amity Police Chief Martin Brody, the vessel's stern shatters into pieces in the teeth of the sea's most fearsome creature, the Great White Shark. With the bow of the boat suspended from the water by the weight and strength of the animal, Quint fights the creature, slipping into the voracious mouth of the monstrous fish, while Brody, in despair, holds on to the doorframes of the Orca's cabin, so he doesn't have the same terrible fate. Replicating the final scene of combat between the brave hunters and cinema's most famous carnivore, Iron Studios proudly presents its 'Jaws Attack Demi Art Scale 1:20' statue, inspired by the classic and iconic film directed by Steven Spielberg.

Winner of three Oscars and numerous other awards, the 1975 film Jaws is considered a watershed in cinema history, being seen as the first American blockbuster and marked by an unmistakable and menacing soundtrack composed by John Williams. Inspired by Peter Benchley's 1974 novel, a summer beach resort town on a fictional island begins to suffer attacks from a White Shark. As a result of these attacks, police chief Martin Brody (Roy Scheider) orders the closure of the beaches. However, fearing an impact on local economic income, which depends on tourism, the town's mayor convinces Brody to reverse his decision, resulting in an attack with tragic consequences. To put an end to the threat, the city hires Sam Quint (Robert Shaw), an old shark-hunting sailor, who along with Martin Brody and consultant oceanographer Matt Hooper (Richard Dreyfuss) depart aboard Quint's boat, the Orca, in hunting the animal, facing a much larger and stronger creature than anticipated, estimating its length at 25 feet (7.6 m) and weighing approximately 3 tons, with an unstoppable force of brutal and instinctive attacks.

More than a collectible statue, a true work of art meticulously replicated in the smallest details of its sculpture, with extreme realism in the textures, colors, and scales of size reproduced in this piece, seeking excellence in its representation. Already available for Pre-Order, the statue was unveiled at the annual Inside Iron Studios: Second Edition virtual event during CCXP Worlds 2021 in the Worlds to Collect arena. Stay tuned for all the news from Iron Studios, coming soon on its social media and YouTube channel.

This item needs to be shipped on a pallet. Additional shipping costs can be applied. 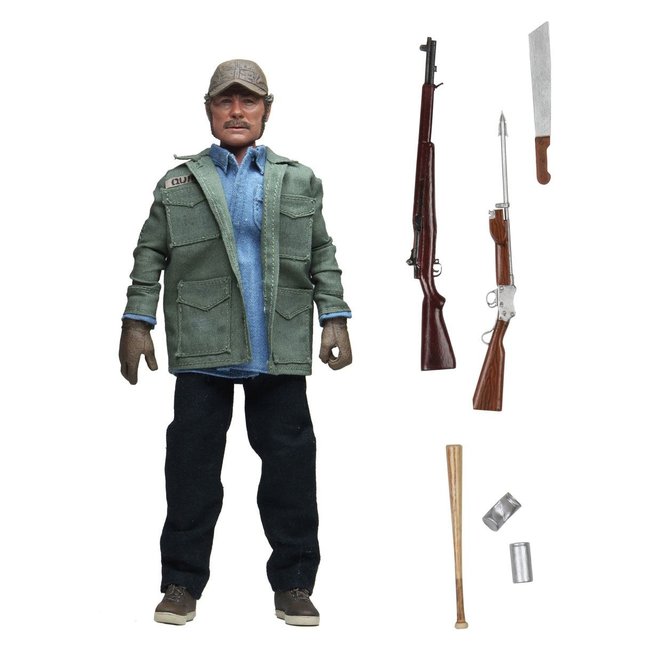 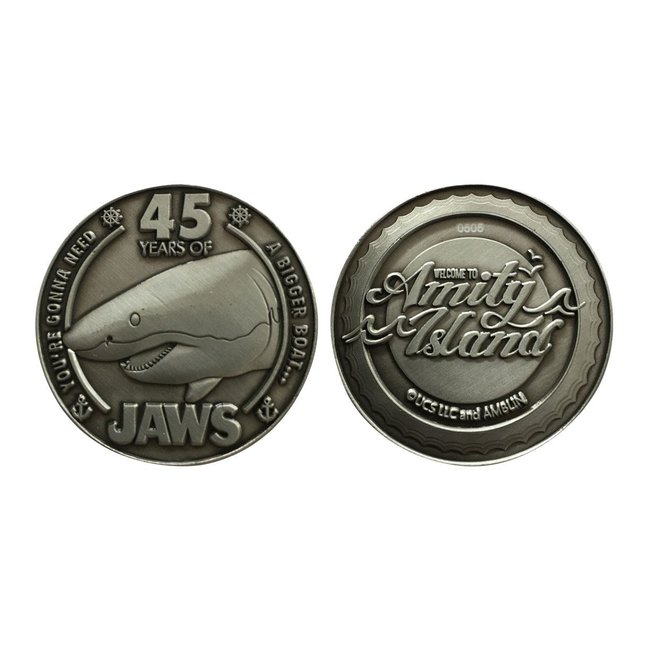 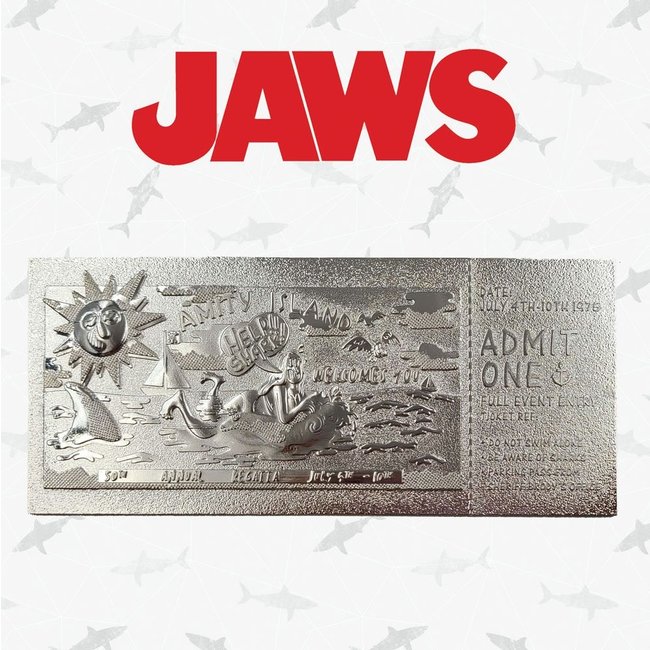 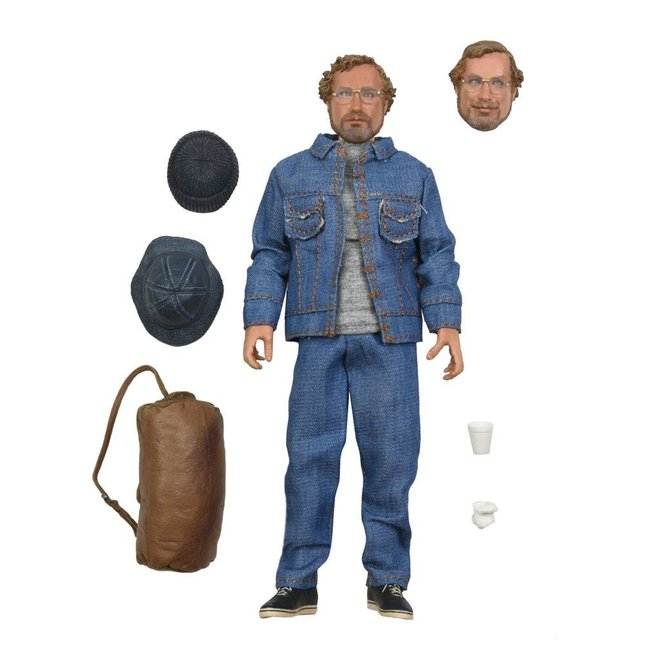