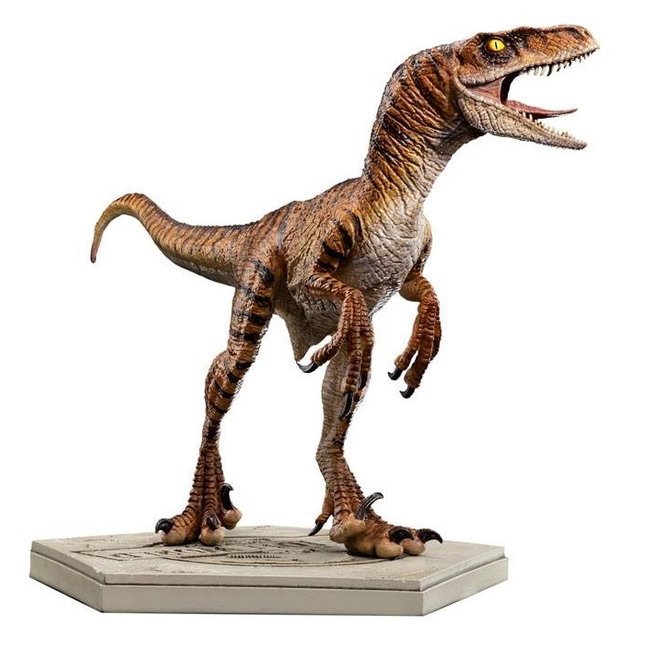 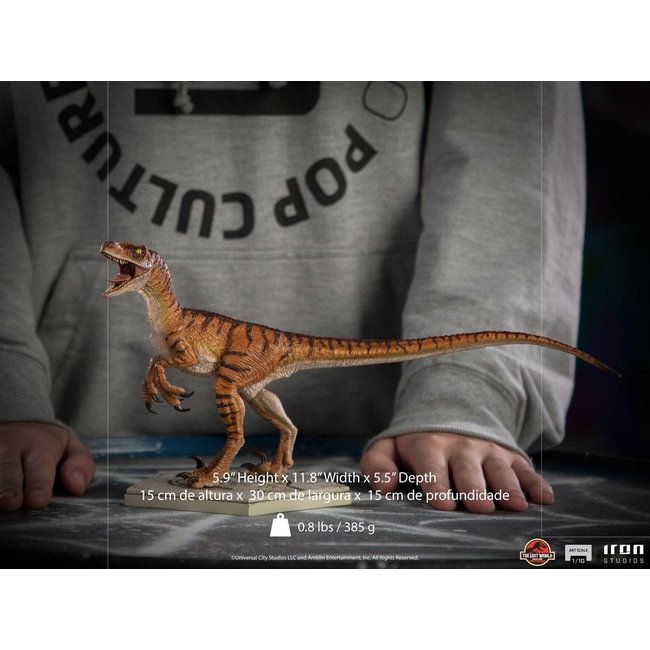 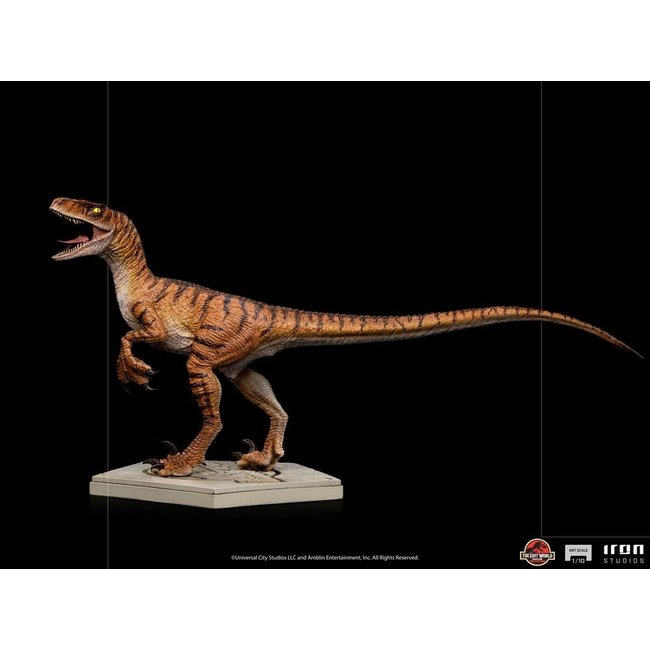 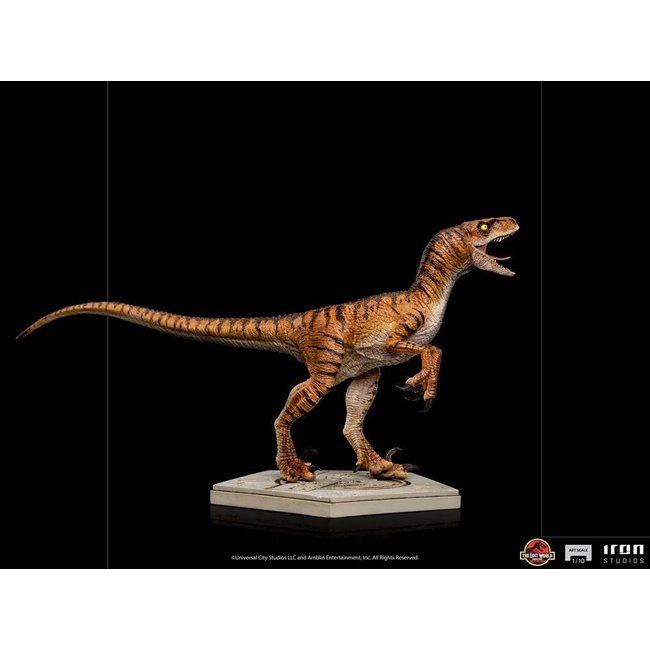 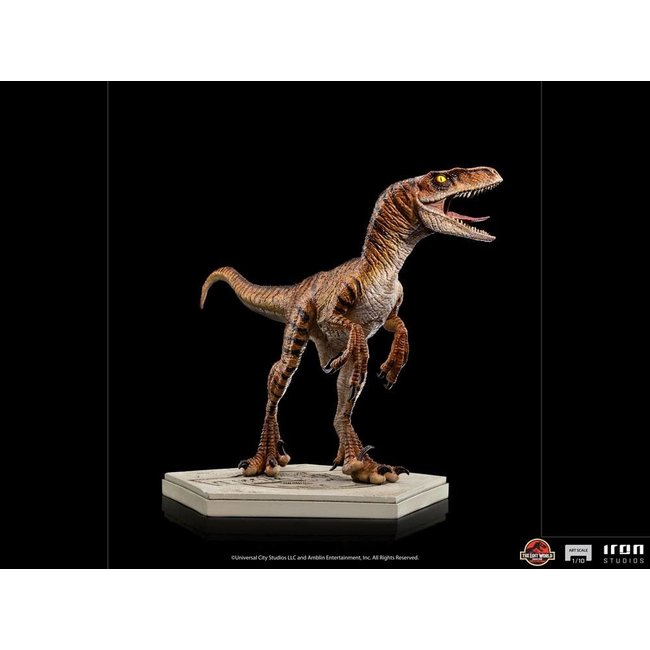 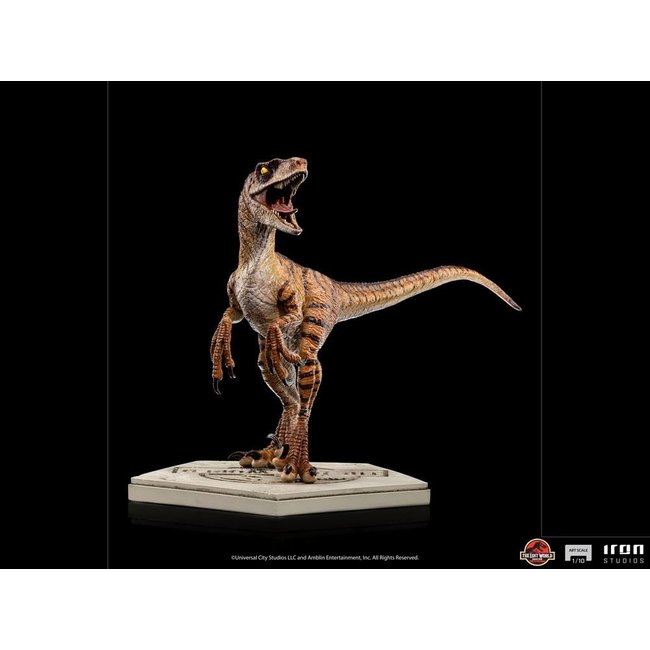 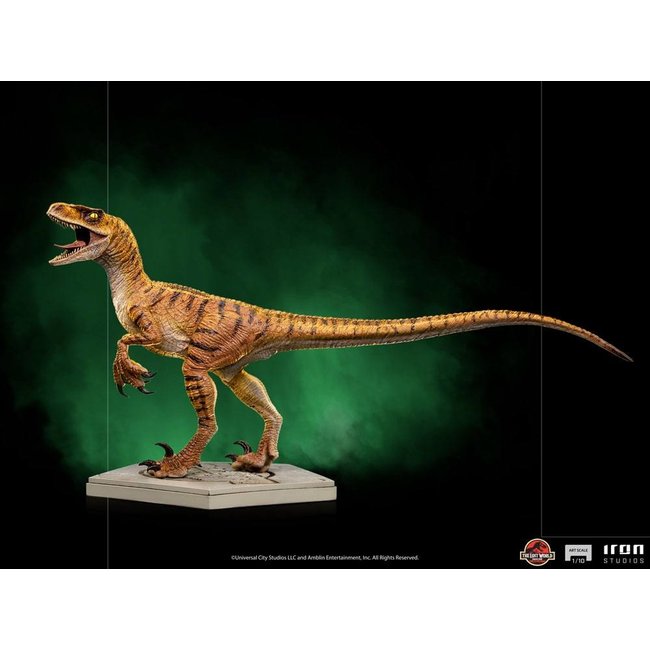 With an orange coloring similar to a tiger with dark stripes and yellow piercing eyes, he is the first male variant of his species, never-seen-before in the cloned animals. Hunting in packs and highly intelligent, the voracious carnivorous creature with a primitive level of vocalization communicates with other members of his herd, both for directing coordinated hunting attacks and for setting traps for their prey. On a pedestal with the movie's The Lost World: Jurassic Park logo, Iron Studios present the statue "Velociraptor - Lost World - Art Scale 1/10" one of the most lethal and feared dinosaurs from Isla Sorna.

Capable of running at a speed of 40 to 60 mph in the open and being astonishing jumpers, measuring from 3 to 5 meters long and having their hind legs "terrible claws" in the shape of a sickle on which they walked on, he is one of the most popular dinosaurs from the Jurassic Park cinematographic franchise. Inspired by the second movie from the first trilogy, The Lost World: Jurassic Park, where a pack of Velociraptors inhabits an abandoned village in Isla Sorna, a group of humans stuck on the island needs to go through these Raptors so they can reach the Communications Center in the village, and call for help and rescue from a helicopter. The Velociraptors in this movie are more colorful in comparison
with the ones from the first movie because they are male variants of the originals.

With many releases derived from the "Jurassic Park" movie, that originated the series, this is the first Iron Studios statue derived from the second movie "The Lost World", expanding the collection for fans and collectors. Revealed on the Inside Iron Studios Day show on YouTube, check out also the statue of the charismatic "Blue Deluxe - Fallen Kingdom - Art Scale 1/10" and "Blue - Fallen Kingdom - Art Scale 1/10", all in Pre-Order, individually available. More Jurassic news soon by Iron Studios! 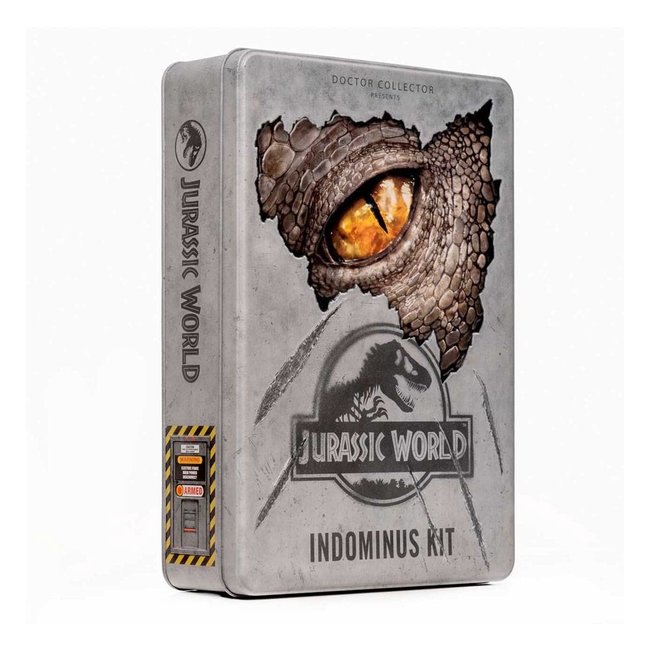 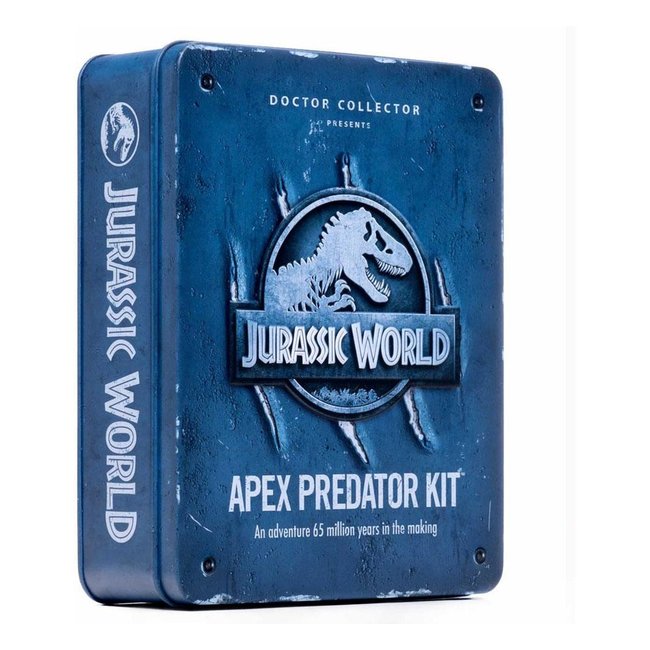 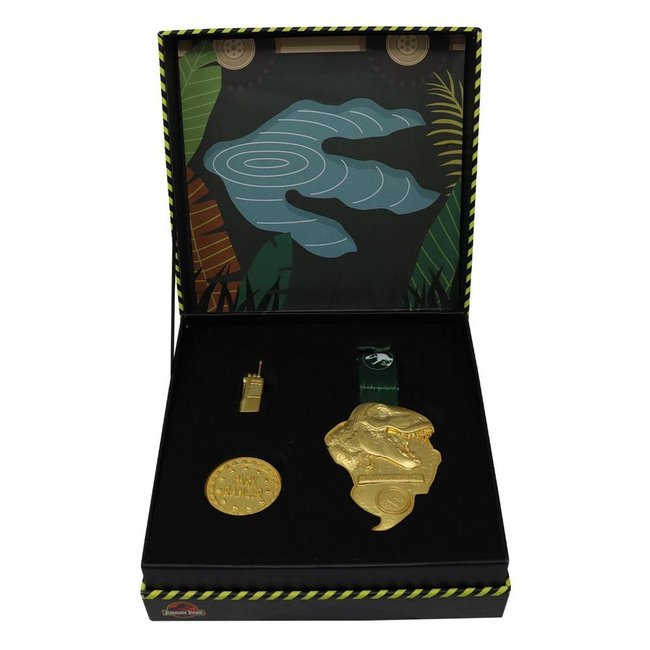 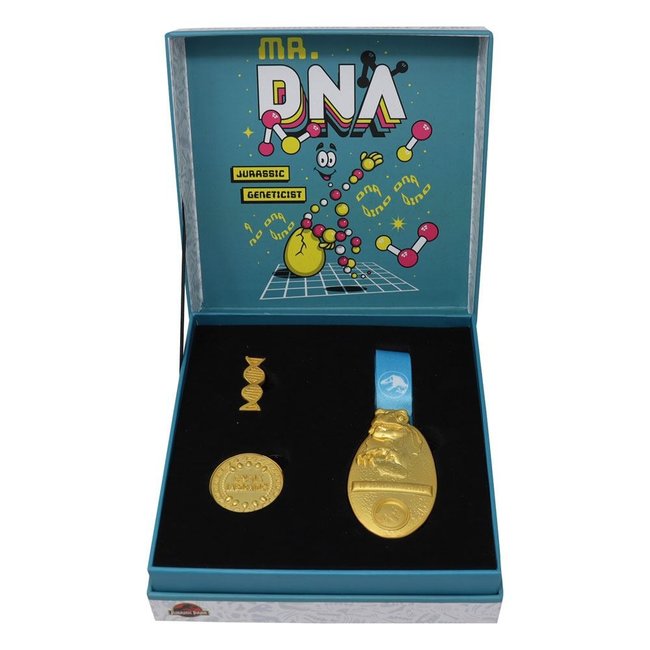 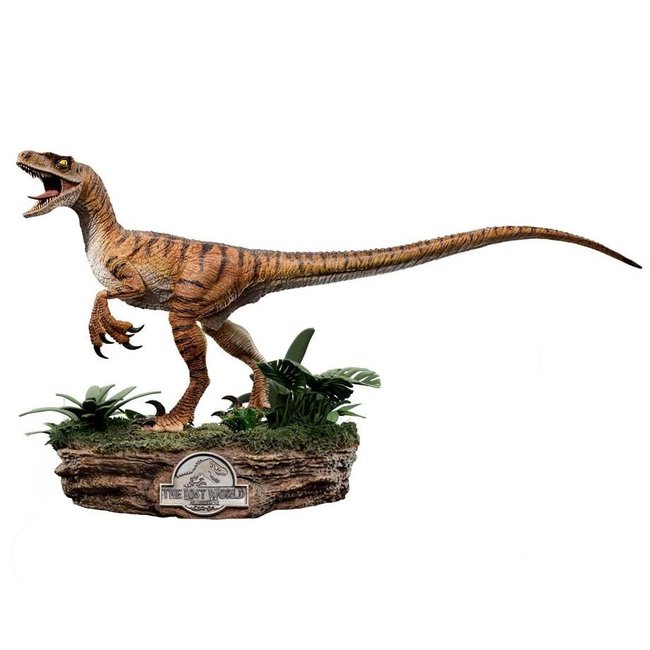 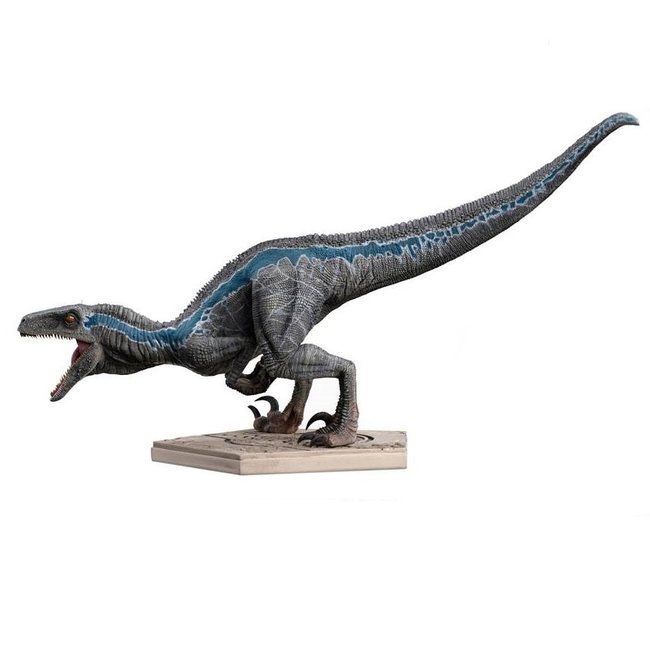