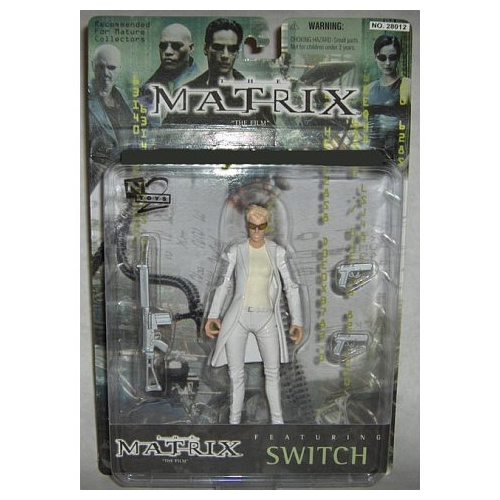 The Matrix is a 1999 American-Australian science fiction action film written and directed by The Wachowskis, starring Keanu Reeves, Laurence Fishburne, Carrie-Anne Moss, Hugo Weaving, and Joe Pantoliano. It depicts a dystopian future in which reality as perceived by most humans is actually a simulated reality called "the Matrix", created by sentient machines to subdue the human population, while their bodies' heat and electrical activity are used as an energy source. Computer programmer "Neo" learns this truth and is drawn into a rebellion against the machines, which involves other people who have been freed from the "dream world".

The Matrix is known for popularizing a visual effect known as "bullet time", in which the heightened perception of certain characters is represented by allowing the action within a shot to progress in slow-motion while the camera's viewpoint appears to move through the scene at normal speed. The film is an example of the cyberpunk science fiction genre. It contains numerous references to philosophical and religious ideas, and prominently pays homage to works such as Plato's Allegory of the Cave, Jean Baudrillard's Simulacra and Simulation and Lewis Carroll's Alice's Adventures in Wonderland. The Wachowskis' approach to action scenes drew upon their admiration for Japanese animation and martial arts films, and the film's use of fight choreographers and wire fu techniques from Hong Kong action cinema was influential upon subsequent Hollywood action film productions.

The Matrix was first released in the United States on March 31, 1999, and grossed over $460 million worldwide. It was generally well-received by critics, and won four Academy Awards as well as other accolades including BAFTA Awards and Saturn Awards. Reviewers praised The Matrix for its innovative visual effects, cinematography and its entertainment. The film's premise was both criticized for being derivative of earlier science fiction works, and praised for being intriguing. The action also polarized critics, some describing it as impressive, but others dismissing it as a trite distraction from an interesting premise.

Despite this, the film has since appeared in lists of the greatest science fiction films, and in 2012, was added to the National Film Registry for preservation. The success of the film led to the release of two feature film sequels, both written and directed by the Wachowskis, The Matrix Reloaded and The Matrix Revolutions. The Matrix franchise was further expanded through the production of comic books, video games, and animated short films in which the Wachowskis were heavily involved.