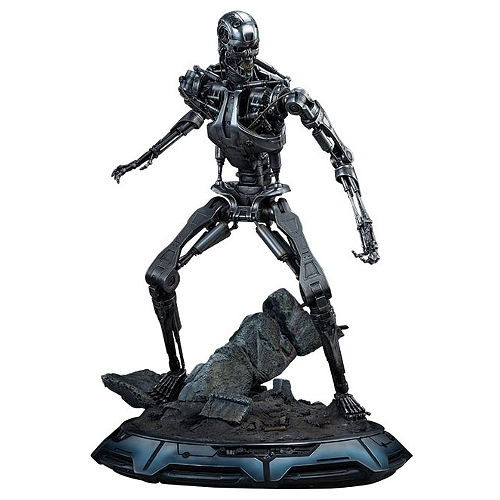 Terminator: Dark Fate is a 2019 American science fiction action film directed by Tim Miller, with a screenplay by David Goyer, Justin Rhodes, and Billy Ray, from a story by James Cameron, Charles H. Eglee, Josh Friedman, Goyer, and Rhodes. Cameron also produced, alongside David Ellison. It is the sixth installment in the Terminator franchise and a direct sequel to The Terminator (1984) and Terminator 2: Judgment Day (1991), while Cameron described Terminator 3: Rise of the Machines (2003), Terminator Salvation (2009), Terminator Genisys (2015), and the television series Terminator: The Sarah Connor Chronicles (2008–2009) as occurring in alternate timelines.

The film stars Linda Hamilton returning in her role of Sarah Connor and Arnold Schwarzenegger reprising his role as a T-800 "Terminator", reuniting the actors after 28 years. The cast includes Mackenzie Davis, Natalia Reyes, and Gabriel Luna as new characters. Set 25 years after the events of Terminator 2, the film sees the machines sending an advanced Terminator (Luna), designated Rev-9, back in time to 2020 to eliminate Dani Ramos (Reyes), whose fate is connected to the future. The Resistance also send Grace (Davis), an augmented soldier, back in time to defend Dani, while they are joined by Sarah Connor (Hamilton) and an aging T-800 Terminator (Schwarzenegger).

Filming for Terminator: Dark Fate took place from June to November 2018 in Hungary, Spain, and the United States. Distributed by Paramount Pictures in North America and 20th Century Fox in other territories, the film was theatrically released in the United States on November 1, 2019. It received mixed reviews from critics, though some considered it an improvement over the last two films. It has also struggled in the box office following a disappointing opening weekend, recouping only $130 million.