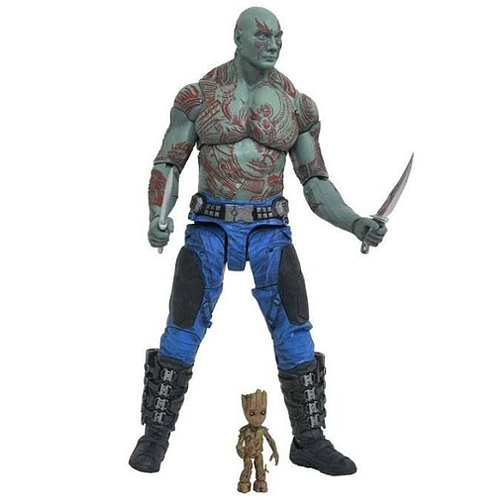 Guardians of the Galaxy is a 2014 American superhero film based on the Marvel Comics superhero team of the same name, produced by Marvel Studios and distributed by Walt Disney Studios Motion Pictures. It is the tenth installment in the Marvel Cinematic Universe. The film was directed by James Gunn, who wrote the screenplay with Nicole Perlman, and features an ensemble cast including Chris Pratt, Zoe Saldana, Dave Bautista, Vin Diesel, Bradley Cooper, Lee Pace, Michael Rooker, Karen Gillan, Djimon Hounsou, John C. Reilly, Glenn Close, and Benicio del Toro. In Guardians of the Galaxy, Peter Quill forms an uneasy alliance with a group of extraterrestrial misfits who are on the run after stealing a powerful artifact.

In 1988, following his mother's death, a young Peter Quill is abducted from Earth by the Ravagers, a group of space pirates led by Yondu Udonta. Twenty-six years later on the planet Morag, Quill steals an orb, after which Korath, a subordinate to the fanatical Kree, Ronan, intercepts him. Although Quill escapes with the orb, Yondu discovers his theft and issues a bounty for his capture, while Ronan sends the assassin Gamora after the orb.

When Quill attempts to sell the orb on the Nova Empire capital world, Xandar, Gamora ambushes him and steals it. A fight ensues, drawing in a pair of bounty hunters: the genetically engineered raccoon Rocket, and the tree-like humanoid Groot. The Nova Corps arrives and arrests all four, imprisoning them in the Kyln. While there, a powerful inmate, Drax, attempts to kill Gamora due to her association with Ronan, who killed his family. Quill convinces Drax that Gamora can bring Ronan to him. Gamora reveals that she has betrayed Ronan, unwilling to let him use the orb's power to destroy planets, starting with Xandar. Learning that Gamora has a buyer for the orb, she, Quill, Rocket, Groot, and Drax work together to escape from the Kyln.