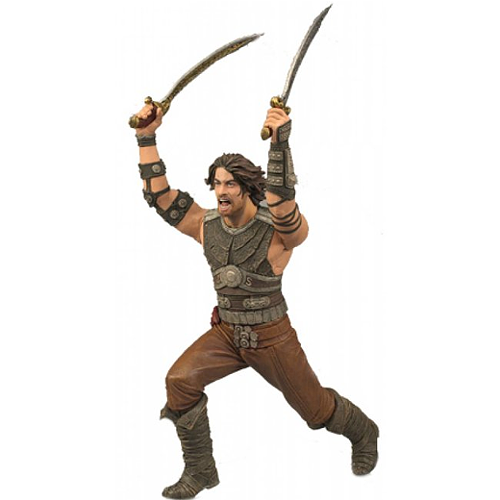 Prince of Persia: The Sands of Time is a 2010 American adventure action fantasy film written by Jordan Mechner, Boaz Yakin, Doug Miro, and Carlo Bernard; directed by Mike Newell; produced by Jerry Bruckheimer and released by Walt Disney Pictures. The film is a retelling of the 2003 video game of the same name, developed and released by Ubisoft Montreal.

The film has the same title as the video game Prince of Persia: The Sands of Time, and is primarily based on it. Elements from Warrior Within and The Two Thrones, the two other titles from the Sands of Time trilogy of the Prince of Persia video game franchise, are also incorporated. The film received mixed reviews from critics and failed at the box office domestically, but it became the highest-grossing film based on a video game.

After committing an act of bravery in the marketplace of the royal city, the street urchin Dastan is adopted by King Sharaman, becoming a prince of Persia. Years later, the grown Dastan spearheads an attack on Alamut, which the king's brother Nizam has accused of selling weapons to Persia's enemies. During the battle, the city's princess Tamina is captured and Dastan acquires a strange dagger. During a banquet, Dastan gives Sharaman a cloak as a gift. Pleased with Dastan's generosity, he offers Dastan a gift in return. As instructed by Tus, he asks for Tamina to be Tus' wife. Sharaman instead offers the princess to be Dastan's first wife. After he declares Tamina Dastan's future wife, the cloak apparently burns him to the touch and kills him. Dastan is framed for murder but narrowly escapes from Alamut with Tamina, evading the king's high-born sons Garsiv and Tus. After being attacked by Tamina, Dastan finds that the sands within the dagger's hilt allow him to rewind time and retain knowledge of what happened before. While going to Avrat for Sharaman's funeral, Dastan was knocked out by Tamina and left alone in the desert where he encountered the M'Bakas which he traded his freedom for the princess but was later betrayed when the leader recognized him. Narrowly escaping them, the two encounter a shady merchant called Sheik Amar, and Dastan encounters Nizam, who pretends to be sympathetic to Dastan's plight. At their meeting, Dastan sees Nizam's hands burned and realizes in horror that his uncle had murdered Sharaman. Dastan escapes from an ambush with the princess, but Nizam secretly sets a group of Hassansins, corrupted Persian warriors, on their tail, while Tus had sent the angry Garsiv and his men to find Dastan.

As they are on the run, Tamina tells Dastan about the dagger's origins: the gods had decided to sweep mankind from the earth with a great sandstorm because of their sin. But a young girl pleaded with the gods and convinced them to withhold their wrath offering herself as sacrifice. The sands from the storms were stored in a great hollow crystal called the Sandglass, with the dagger, called the Dagger of Time, being the only thing that could break the crystal. The Sandglass was hidden beneath Alamut with Tamina's family, descended from the young girl who saved mankind, as its guardians. It is shown that Nizam orchestrated the siege of Alamut so he could hunt for the Sandglass and use the sands to change an event in his youth where he saved Sharaman from a lion, thereby ensuring Nizam would become king.

Seeing that the sands’ release would destroy the world, Tamina is willing to return the dagger to the place where it was given, giving her life in the process. They reach the dagger's resting place in the Hindu Kush, after being captured by Sheik Amar, but are ambushed by soldiers under the command of Garsiv. Dastan manages to convince Garsiv of his innocence, but the Hassansins attack. Tamina escapes the ambush and goes down in to the bottom of the sanctuary, preparing to return the dagger, but Dastan stops her saying he isn't ready for her to die. The two share an intimate moment and nearly kiss, but then the leader of the Hassansins takes the dagger from Tamina and kills Garsiv. Together with Sheik Amar, his Umbakan guardian Seso and his retinue, Dastan and Tamina head back to Alamut. After Seso retakes the dagger from the Hassansin guarding it, Dastan uses it on himself in front of Tus, showing him the power of the dagger and his own innocence. But Nizam arrives, kills Tus and takes the dagger, leaving Dastan to die. Tamina saves him and they go down into the catacombs of Alamut.

Dastan confronts Zolm, the Hassansin leader, and is nearly killed until Tamina takes Zolm's snake and stabs him in the eye with its teeth while Dastan pushes him down deeper into the catacombs beneath alamut, to his death. Dastan and Tamina then kiss tenderly. The two arrive in the chamber of the Sandglass as Nizam stabs it, starting the release of the sands. When they reach him, Nizam attacks them, and Tamina, who has grown to love the prince, sacrifices herself to give Dastan his chance which leaves Dastan heartbroken and devastated. Dastan manages to remove the dagger from the Sandglass, preventing the apocalypse, then time is rewound to just after the siege of Alamut, undoing all the events he has lived through. Dastan manages to find his brothers and expose Nizam of his treachery, who attacks Dastan in a rage and is soon killed by Tus.

As an apology for the ransacking of her city, Tus suggests that Dastan and Tamina are married as a goodwill pact. As they converse afterwords, Dastan hints at his knowledge of the dagger’s power and says he looks forward to their future together.