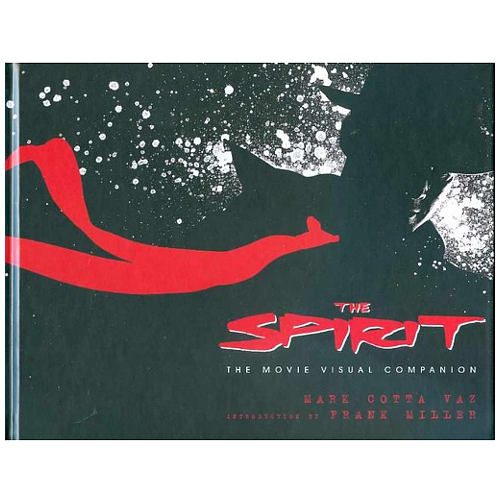 The Spirit is a 2008 American neo-noir superhero film, written and directed by Frank Miller and starring Gabriel Macht, Eva Mendes, Sarah Paulson, Dan Lauria, Paz Vega, Jaime King, Scarlett Johansson, and Samuel L. Jackson. The film is based on the newspaper comic strip The Spirit by Will Eisner. OddLot and Lionsgate produced the film.

In a cat-filled mausoleum in Central City, Denny Colt, also known as The Spirit, receives a call from Detective Sussman about a major case that could involve the Spirit's arch-nemesis, The Octopus. The Spirit dons his costume and travels across rooftops while delivering a voice-over soliloquy about the city being his one true love. A woman (Kimberly Cox) is being mugged in an alley below. He manages to save her, receiving a knife wound that he barely seems to notice. The woman asks, "What are you?", with an arriving officer answering, "That's The Spirit". The Spirit runs away, catching a ride from Officer Liebowitz and heading toward the flats.

At the swampland, femme fatale Sand Saref rises from the water and appears to shoot Sussman multiple times. The Spirit and Liebowitz find the wounded Sussman, but a flashback reveals that it was really the Octopus who shot him in an effort to recover two identical chests underwater. Sand and her husband Mahmoud tried to flee with both chests, but the Octopus wounded Mahmoud and snapped a line connecting the two chests. Sand escaped, leaving one chest behind, which the Octopus retrieved from the murky depths.

After the Octopus kills Liebowitz, he sends away his cloned henchmen, Ethos, Pathos, and Logos, to take on the Spirit alone. His accomplice Silken Floss drives up, running over Pathos in the process. She departs with the cargo as the two arch-nemeses fight.

Cutting to the next morning, The Spirit is awakened in a hospital by his lover Dr. Ellen Dolan, daughter of the Police Commissioner. Appearing to be in perfect health despite his gunshot wounds, the Spirit is shocked to notice a gold locket in Sussman's hand; a piece torn from Sand Saref's neck earlier.

Saref's locket contains pictures of a much-younger Denny Colt and Sand; the two grew up together in Central City where Denny bought Sand the locket as a gift to satisfy her love of "shiny things". They lived happily until Sand's father, a police officer, was shot dead. Sand, now disenchanted with the city and its corruption, fled to Europe and has not been heard from for fifteen years. In a secret lair, the Octopus and Silken Floss open their stolen chest, but discover that it does not contain the mysterious Blood of Heracles as expected but the Golden Fleece, and decide a trade is in order.

Sand and Mahmoud visit the office of a high-class fence named Donenfeld, whom Sand paid to locate the underwater treasure. It is implied that Donenfeld gave up the treasure's location to the Octopus to ensure his family's safety. At Alice's Hospital, the Spirit has fully regenerated and is as good as new; Commissioner Dolan angrily enters with young rookie cop Morgenstern and calls the Spirit away to a case.

Sand's history as one of the world's great jewel thieves is relayed to the Spirit. As the Spirit is about to arrest her, he is caught off-guard by her standing before him fully nude. Sand doesn't recognize the Spirit as the presumed-dead Denny. She is stunned when he reveals his knowledge of her looking for the Golden Fleece and she shoves the Spirit through a window, only to see him survive the fall.

After his run-in with Sand, the Spirit receives a tip on the location of the Octopus's lair. In the process of breaking in he is captured and tied to a dentist's chair. The Octopus reveals his own origin as well as how he and the Spirit became arch-enemies: Octopus and Floss's experimentation have led to the creation of a serum (something of a scientific equivalent to the Elixir of Life) that could grant immortality. The Octopus first tested it on the dead body of the murdered officer Colt, who came back from the dead; his resurrection has earned the ire of Death, being the only man to ever wrongfully escape her clutches. Contacting Dolan, the only one aware of his true identity, he vowed to become the city's protector, "her spirit". Eventually, the Octopus injected himself and arch-enemies were born. However, the Octopus needs the blood of Heracles, a demi-god, to perfect the serum's formula. The Spirit manages to escape by spontaneously seducing a belly-dancing female assassin named Plaster of Paris, who as a parting gift turns on The Octopus in favor of The Spirit's charms.

Outside in an alley, The Spirit irks Paris by mentioning Sand's name; she stabs him out of spite. After being unconscious for a period of time, the Spirit stumbles to the city docks and collapses into the cold water, where he confronts the ethereal Angel of Death, Lorelei Rox, who has haunted his sleep. While at first he is willing to finally give in to her embrace, he escapes her yet again when he manages to gather his senses by remembering Ellen, Sand, Floss, Paris, and the other women he claims to see in place of his life flashing before his eyes. As the Spirit swims to the surface, Lorelei vows that he will be hers eventually.

At the projects, Sand and her latest henchman fly in with the Blood of Heracles to meet Floss and a clone carrying the Golden Fleece. After a four-way Mexican standoff, Sand attempts to convince Floss to get out of serving the Octopus before she is killed by the Octopus himself. The clone kills Sand's henchman and the Octopus asks Floss for the vase. As the Spirit suddenly materializes, Floss drives off, unable to take a side. The Octopus unloads with progressively bigger guns on the Spirit, apparently killing him off, but Dolan's SWAT team storms the area and opens fire right after. Morgenstern blows the Octopus' arm up with a hand-cannon and Dolan shoots him several times on the head. To recover from the damage, the Octopus gets to the Blood of Heracles and prepares to drink it, but Sand shoots the vase just in time as the Spirit rises, having worn a bullet-proof vest. He then attaches a grenade to the Octopus' chest, blowing him up into pieces with Sand protecting the two of them with the Golden Fleece.

Showdown over, the Spirit gives Sand her locket back. They kiss as Ellen looks on, feeling betrayed. The old flames bid each other goodbye and the Spirit convinces Dolan to let Sand go in gratitude for saving him and the world. Nearby, Floss discovers one of the Octopus's severed fingers crawling towards her; she picks it up and departs with two of the clones saying, "We'll start from scratch". Meanwhile, the Spirit and Ellen make amends and embrace.

The final shot shows the Spirit standing triumphant on a rooftop with his cat, looking over the city as the sun rises.