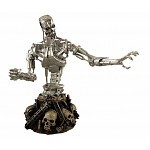 Terminator Salvation is a 2009 American science fiction action film directed by McG and starring Christian Bale and Sam Worthington. It is the fourth installment in the Terminator film series. In a departure from the previous installments, which were set between 1984 and 2004 and used time travel as a key plot element, Salvation is set in 2018 and focuses on the war between Skynet and humanity, with the human Resistance fighting against Skynet's killing machines. Bale portrays John Connor, a Resistance fighter and the franchise's central character, while Worthington portrays cyborg Marcus Wright. Terminator Salvation also features Anton Yelchin as a young Kyle Reese, a character first introduced in The Terminator, and depicts the origin of the T-800 Model 101 Terminator.

After a troubled pre-production, with The Halcyon Company acquiring the rights for the franchise from Andrew G. Vajna and Mario Kassar and several writers working on the screenplay, filming began in May 2008 in New Mexico and ran for 77 days. Terminator Salvation was released on May 21, 2009 in the United States and Canada, followed by early June releases in the United Kingdom, Australia, New Zealand, and South Africa. Warner Bros. handled the North America release and Sony Columbia Pictures the international one. The film grossed over $371 million worldwide, but received negative reviews which criticized the story and the absence of Arnold Schwarzenegger, who was replaced by a digital computer graphics version.