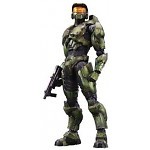 Halo is a best-selling military science fiction first-person shooter video game franchise created by Bungie and now managed and developed by 343 Industries, a subsidiary of Microsoft Studios. The series centers on an interstellar war between humanity and a theocratic alliance of aliens known as the Covenant. The Covenant, led by their religious leaders called the Prophets, worship an ancient civilization known as the Forerunners, who perished in combat with the parasitic Flood. The central focus of the franchise builds off the experiences of Master Chief John-117, one of a group of supersoldiers codenamed Spartans, and his artificial intelligence (AI) companion, Cortana. Other characters, such as Noble Six from Halo: Reach, are also introduced in the series. The term "Halo" refers to the Halo rings: large, habitable structures that were created by the Forerunners to destroy all sentient life. They are similar to the Orbitals in Iain M. Banks' Culture novels, and author Larry Niven's Ringworld concept.

The games in the series have been praised as being among the best first-person shooters on a video game console, and are considered the Xbox's "killer app". This has led to the term "Halo killer" being used to describe console games that aspire, or are considered, to be better than Halo. Fueled by the success of Halo: Combat Evolved, and immense marketing campaigns from publisher Microsoft, its sequels went on to break various sales records. Halo 3 sold more than US$170 million worth of copies in the first twenty-four hours of release, breaking the record set by Halo 2 three years prior.Halo: Reach, in turn, broke the record set by Halo 3, selling US$200 million worth of copies on its first day of release. Continuing the trend, Halo 4 broke Halo: Reach  's record on its opening day by grossing US$220 million. The games have sold over 60 million copies worldwide, with the games alone grossing almost $3.4 billion.

Strong sales of the games led to the franchise's expansion to other media; there are multiple bestselling novels, graphic novels, and other licensed products. Halo Wars took the franchise into new video game genre territory, as it is a real-time strategy game, while the rest of the games in the series are first-person shooters. Beyond the original trilogy, Bungie developed the expansion Halo 3: ODST, and a prequel, Halo: Reach, their last project for the franchise. A high-definition remake of the first game entitled Halo: Combat Evolved Anniversary was released on November 15, 2011, exactly ten years after the release of the original. A new installment in a second series of games, Halo 4, was released on November 6, 2012. Halo: The Master Chief Collection, a graphically remastered compilation of the four primary Halo titles, was released for the Xbox One on November 11, 2014.

The cultural impact of the Halo series has been compared by writer Brian Bendis to that of Star Wars. The collective group of fans of the series is referred to as the "Halo Nation".